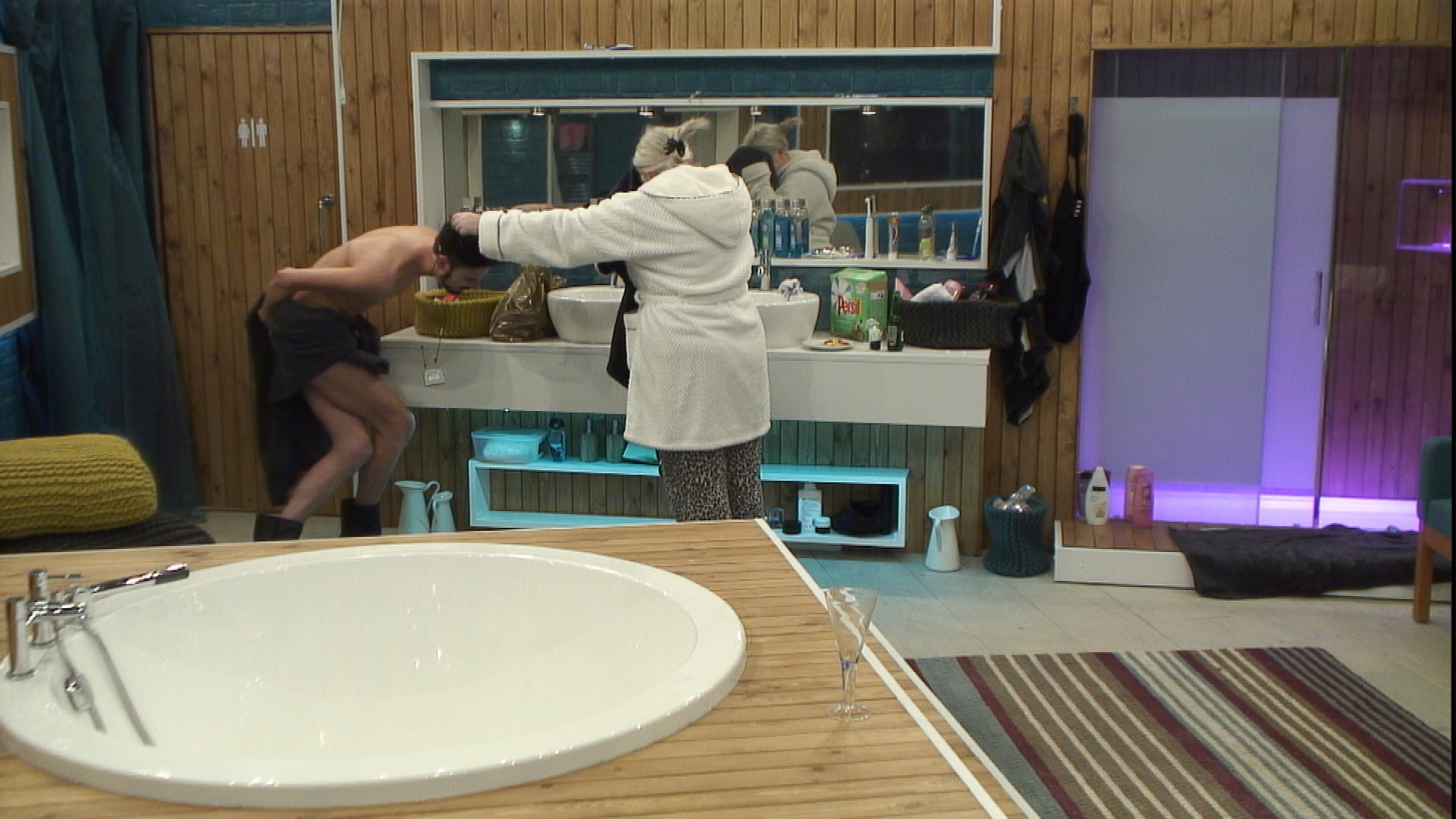 Heidi has made a discovery in the kitchen, “This is some weird coffee, what do you do?” Claire replies, “It’s instant, spoon in a cup and you add hot water and milk.” Heidi continues to make coffee her and Spencer coffee.

Razor and Rylan are talking about Frankie. Razor says, “He’s told me yesterday he’s had enough, he’s missing his routine.” They watch the jockey as he paces around the garden. “I’d love to have a bum like Frankie’s,” comments Rylan.

Spencer tells Heidi, “It looks like Dettorio or whatever his name is, he’s like ‘O sh*t Speidi’s still here. I should have kept my mouth shut’.”

Tricia is talking to Big Brother. “It’s a weird feeling facing the public vote for the first time; you start to think ‘O God. Am I liked or not liked? Who is going to pick up the phone and vote?’ I’m not as popular as some of the people in here…it’s a bit scary. It will be between me and Heidi and Spencer, I will be seriously worried if I go over them two. I’ve been part of the group and really enjoyed it. It’s good we are all up and leave it to the public to decide.”

Spencer and Heidi are talking outside. He remarks, “I just love that the Brits call us Speidi; we’ve definitely up staged Spiderman in England!” Heidi thinks that “it sounds like something you would want to chant”. She adds, “I can see Rylan winning.” Spencer says, “If it’s not us I would want it to be him.” Heidi agrees and comments on how they’ve survived the evictions. Spencer quips, “I’m pretty sure tomorrow we are safe. I think it will be Ryan or Razor.” The two chant “get Speidi out”!

Spencer is quizzing Claire about pop music. Claire tells Heidi and Spencer that Kylie Minogue is from Australia and starred in Neighbours.

Ryan is called to the diary room for today’s task. He is presented with two cup cakes and asked to eat one; he chose to eat the Angel cake. This test was to see whether he was more tempted by Angels or Devils, because for the task he will have to make several choices between the two.

Big Brother directs him to an earpiece and explains that it has two direct lines: one to Heaven’s Angel and one to Heaven’s Devil, each of them are keen to persuade him to do their bidding and will both issue instructions which Ryan will have to choose which one to obey. Ryan laughs.

Dressed as an Angel, Razor speaks to him; “Hello Ry Ry. Listen to me very carefully. I’m the voice of an Angel you must listen and obey my commands all day. Don’t let any devilish thoughts enter your head, and we can have a laugh.” Next to talk is Devil Rylan, “Don’t listen to him, you’ll have more fun if you listen to me today!”

To pass the task, all Ryan has to do is obey either Angel Razor’s or Devil Rylan’s commands without getting rumbled by the other housemates.

Ryan’s first command is from Angel Razor, “Go and ask Claire to tell you a silly joke and go over the top laughing.” Devil Rylan orders him not to laugh. Ryan asks Claire for a joke, she says, “What do you call a donkey with three legs? A wonkey!” Ryan laughs and laughs, and repeats the joke. Angel Razor is happy. He next asks him to ask Speidi to show him their Tai Chi moves, they do so.

Next, Angel Razor instructs Ryan to show Frankie some horse impressions. Ryan neighs and asks Frankie does he ever whisper to his horses, Frankie replies; “I talk to them.”

Angel Razor asks Ryan to go to Heidi and tell her that she’s improved her clothes. Ryan tells Heidi, “I love what you’re wearing today! I love the way you are looking its very English!” Heidi thanks him and smiles.

Ryan’s next instruction from Angel Razor is to cuddle everyone in the house. Ryan announces that he is missing his wife and hasn’t had a cuddle in a while. Tricia offers him a cuddle. While they hug, Razor instructs him to say “that’s not a canoe in my pocket.” The pair laughs and continue to hug.

Ryan obeyed all of Angel Razor’s instructions without the housemates knowing; he therefore successfully passed the task and housemates will be rewarded with a party.

Big Brother gathers the housemates and explains that Ryan, Rylan and Razor successfully completed their secret mission and have won a devilishly tempting party for their housemates. However Heidi, Spencer and Gillian will not be attending the party as they talked about nominations the night before. The exchange went like this, “You are next on the list!” Spencer told Gillian, Heidi laughed. “O thanks Spence, you are now on my list!” replied Gillian. Instead, the three of them will have a right Cockney knees up. The group laugh, Spencer smiles; “I can’t Adam and Eve it!”

The party is in full swing with the housemates dancing and singing; Gillian, Heidi and Spencer are in the igloo having a Cockney knees up listening to Chaz and Dave. Gillian is teaches the couple some Cockney.

Ryan and Razor are passing on self defense moves to Rylan.

In the kitchen, Heidi is revealing all about her relationship, “He has the biggest heart. He’s the most loyal, loving, thoughtful, kind, generous, amazing person. No one like him. I feel like he’s from different universe and I love him more every second, every minute. I thank God for every second I have him. He’s just like my heart, my soul. I prayed for him from the time I was two years old. Every time I look at him my heart just melts. I love him so much. He is my everything.” She gets upset and Spencer hugs her. Claire adds, “And I thought I loved my husband a lot.”

Rylan is dying his beard with help from Claire. He quips, “We’re not all born with a dark beard like Italians! So of us have got to fake it!”

In the kitchen, Spencer tells Frankie, “We went from the top top to the bottom so fast so I saw how fake it was. We haven’t been on television for over two years.” Heidi adds that it’s been hard.

Frankie says, “Someone said to me, the cream also comes to the top. If you’re talented you will smash it.” Heidi says she is not talented. Razor adds that they are talented for what the couple has done. Frankie tells them not to give up and that he’s had a rollercoaster life.

Rylan is still working on his beard.

Heidi and Spencer talk to Big Brother. Heidi says, “I feel like tonight was one of our first night’s to see the other housemates and their stories, and what they are going through in their lives. I feel really bad for the judgments I’ve made, its miss communication and a wrong perspective. I was very wrong for saying anything negative.”

Spencer remarks, “We treated it like a silly game. For these people it’s more like an experience for them.”

“I’m very regretful for a lot of things I’ve said. These people deserve to be here more than we do. I hope they all stay.” Concludes Heidi.