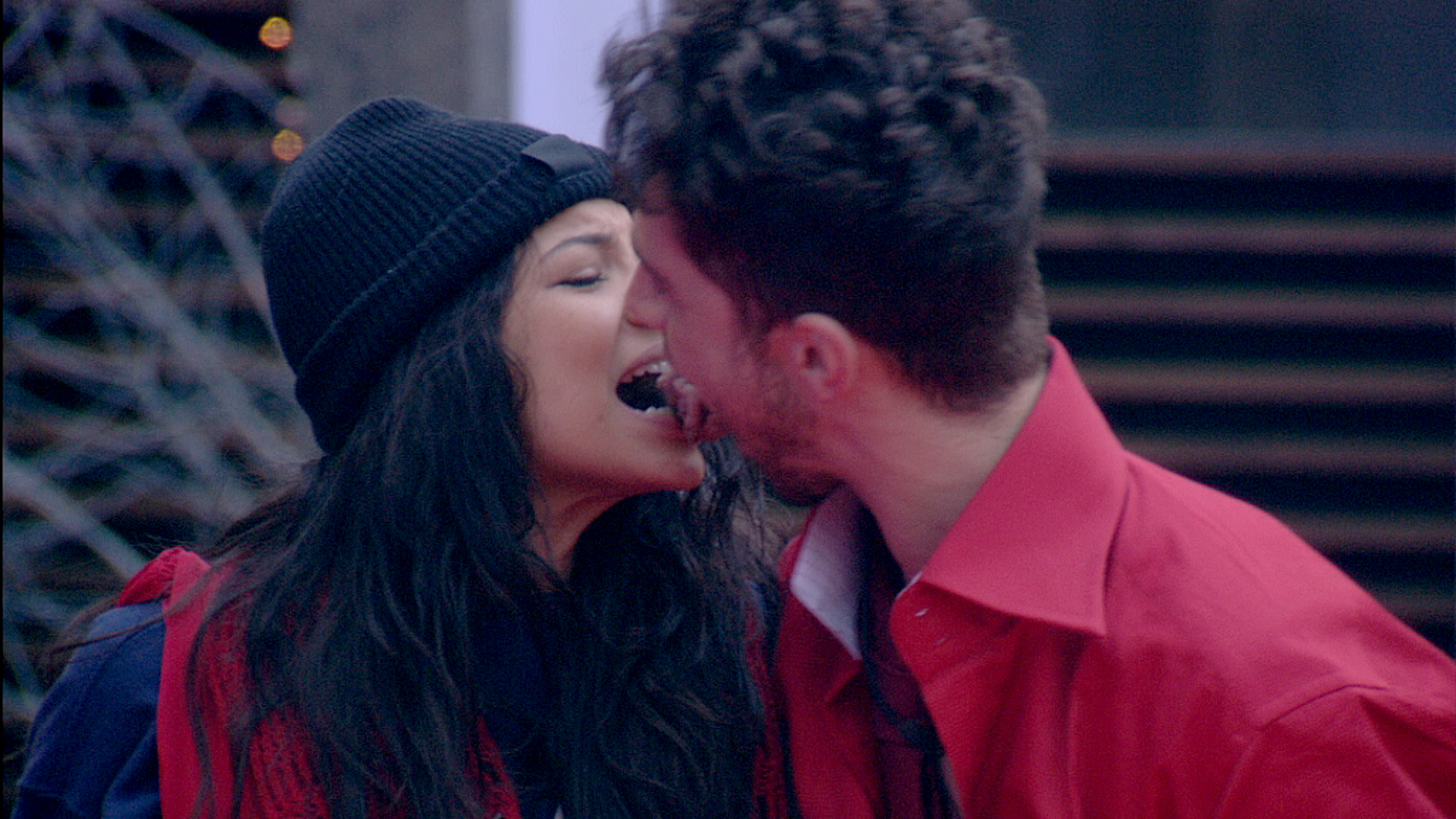 Paula goes to the diary room. Paula: “Morning Big Brother…..I’m not in their heads but they seem fine. Frankie is a hero; he’s such a great guy. I needed to normalise the situation…I would hate to be first out of Big Brother.

As part of this week’s shopping task Big Brother has placed a randomiser in the living area and housemates are getting inquisitive.

Ryan: “What’s this?” Paula “Razor, what’s this” Razor “Looks like balls are going…it’s a blender for people we don’t like, put them in the top”

11:34am
Big Brother has set a dining table in the garden for the first part of the shopping task and Rylan is investigating. There are names on each seat at the table in the garden. For this week’s shopping task Big Brother is leaving it all to chance. It currently contains one green ball saying ‘Pass’ and one red ball saying ‘fail’. At the end of the task only one ball will be drawn from the machine to decide whether or not the housemates pass or fail. However over the next couple of days housemates will have the chance to win more green pass balls and if they fail they will receive more red fail balls. Will the odds tip in their favour? Big Brother has gathered housemates at the sofas to tell them more about today’s task.

Gillian: “The first task is called ‘pass the pass’. Shortly housemates will be sampling the menu at Big Brother’s Bistro. The object of the game will be to pass the object on the menu from mouth to mouth. Heidi will pick up the object and pass to Spencer and Spencer will pass to Lacey and so on.”

Razor: “Can Sam sit next to Rylan”

11:55am
Heidi comes to the diary room. Heidi: “I would request that Spencer not sit next to Lacey as we are married and that would not happen in my house. I’m not happy with that. So if he could switch with Ryan or anyone that would be fine but not women, that’s just not happening”.

Big Brother: “How does Spencer feel about this?” Heidi: “The exact same…specifically the issue is I will not allow my husband to be mouth to mouth with Lacey. I think its inappropriate…that’s like kissing somebody…it’s too intimate” Big Brother: “Heidi all housemates will be passing objects mouth to mouth. Heidi, Big Brother’s decision is final” Heidi: “Okay then I won’t be participating” Heidi leaves the diary room in tears

Spencer: “What’s wrong dear?” Heidi: “I just hate this show. They said you can’t switch places with someone. I mean do you want to do it?” Spencer: “Of course I don’t. I can drop every single one. I wouldn’t even give it two thoughts. They are just trying to get this out of you so I wouldn’t even worry”

12:35pm
It’s been 38 minutes since the first task was revealed and Spencer and Heidi have come to talk to Big Brother. Big Brother: “Have you thought any more about this task?” Heidi: “Yes, and we will try to do the task” Spencer: “When she says try it means I’m going to drop everything and forfeit the task as Big Brother does not care about marriages” Big Brother: “To clarify Big Brother does not change the rules of tasks. Heidi if you refuse to take part in this task you will incur 10 fails for the group. Spencer you will also incur 10 fails” Spencer: Well they nominated 10 times for us so I couldn’t care if I got 100 fails for them – watch and enjoy the show as I couldn’t care less about their luxury food budget”

1:56pm
Big Brother has opened the gym and Rylan is first in. Rylan: “Is this it? Do I fit in at the gym?” Razor: “You’ll normally run in front of a mirror, you’ll love it” Paula and Heidi are in the bedroom. Paula: “You have proved that there is one soul mate for everyone. You have found your one in a million” Heidi: “Absolutely. I’m with him every second but anyone else I would be alone so much” Paula: “You just gel” Heidi: “We do, we are very similar and he is very understanding and loving and sweet…and he never really had girlfriends before me…not marriage material….but I like being alone a lot. I like meditation time” Paula: “Me too. Yesterday I was in an even worse and worse space, and now I’m ready for Wednesday. I’m quite happy to go” Heidi: “Me too. I would like to be either the first to go, or the winner. Anything in between, you know…”

Razor, Rylan and Frankie are in the garden smoking. Rylan: “You’re not worried about Wednesday are you? God if you’re out I’d strip naked and let razor suck me off” Razor: “Hold up, what do I get out of this? In fact, thanks for that Ry” Rylan: “No honestly if you were out I’d eat that bull’s willy”

2:26pm
Rylan is grilling Heidi in the hot tub. Rylan: “So you’d had a lot of surgeries” Heidi: “Yeah I did, it was just when I was young, I wanted it and I just got a few things done, and then I got a few more things done. I kind of wish I’d never talked about it and that I’d kept it more private. I never realised I would be a surgery girl for the rest of my life as I was honest about what I did and I just didn’t want to be a liar. It kind of backfired”

Rylan: “I think you look brilliant. And not to be pervy but your tits are amazing. I wouldn’t look at you and think you’d had surgery”

Heidi: “Well that’s why my surgeon was really brilliant. And even my family turned their back on me for a while with my surgery and stuff. I’ve only just started talking to my mum again. On TV they ripped me apart and I was like I’m done with this. I didn’t talk to my family for two years and I never thought that would happen to me, me and my mum were like best friends growing up. I did change and I did become the person I was pretending to be in The Hills and I should have just stood up for myself. We both did. Now I’ve come back from it and I’m happy. It’s about simplicity and health…and love. As long as I have Spencer I’m fine, and we’ll be together forever”

Lacey has joined the hot tub session. Heidi: “In America you can be famous overnight and you can be un famous overnight” Rylan: “That’s the problem ‘cause in Britain I was famous overnight, but I was hated overnight. There was a time not two months ago that every single person in this country said my name. I thought I wanted that…but people will come up to you and you’re like how is this person going to be?…it’s quite frightening but you don’t get one without the other. Heidi: “You become dehumanised…your emotions don’t count…like a mascot almost. I gotta get our of here I’ve been in here since you were in the gym, but good chat” Rylan: “The moral of the story is enjoy it. She’s one of the most intelligent people I’ve ever met and that’s a credit to her”

4:18pm
Paula and Lacey are in the bedroom. Paula: “I guess on the outside you think you can cope. I definitely feel on the outside to everybody…always have done all my life” Rylan comes to the diary room for the second task to eat chocolates which have randomly have scotch bonnet chillies inside. Rylan won 20 green pass balls and 4 red fail balls.

5:49pm
Paula is taking time out. Paula: “I’ve figured out why I’m so low. I’m not here in the winter. It’s the winter that’s getting to me” Rylan “So why don’t you make it summer” Paula: “I feel on the outside. I’m not used to loud noises all the time and I won’t want to join in. I don’t feel left out. It’s just the way I am” Rylan: “Well if you ever feel like that grab me and we will come outside or sit in the igloo. Do you want a hug?” Paula: “It will make me cry” Rylan: “You’re a very good woman Paula and the British public would be fools not to see it. You should never judge a book by its cover, that’s what you have taught me. There’s a lot of chapters”

8:24pm
Big Brother has gathered the housemates for another task. For this task housemates must catch floating balls between their pursed lips. If any housemates refuse to take part they will each incur fails. Razor: “The next part of this week’s task is all about kissing balls” The first housemates to play are Ryan and Razor. Heidi declined to play the task with Rylan. Spencer: “Today was already a stretch for us. You guys can just nominate us again if you have a problem” The housemates all participated the task except Heidi and Spencer. “This is Big Brother. As Heidi and Spencer failed to take part in the task the have incurred 20 red fail balls for the group. In total the group received 80 green pass balls and 40 green fail balls” Ryan: “That’s absolutely disgusting Big Brother. People take a vow in the eyes of their god and they should be able to uphold it” Paula: “You should be ashamed of yourselves” Heidi and Spencer are in the diary room.

Heidi: “I was warmed by the housemates support for us during the task and their respect for how important it is to us and that they stood up for us and I really appreciate it” Spencer: “Anything I ever felt about them in the past is completely void now. I don’t think I have friends and family at home who would have protected us as much as our housemates did”

Housemates have been gathered for the next part of the task. Claire has been sent to the diary room. She is unaware that she will be taking part in an endurance challenge. Claire makes her way to the small task room where she must stay listening to 5,6,7,8, by Steps on repeat. The housemates will get to see on screen how many passes Claire wins and can free her using the release button if they wish and bank the passes Claire has gained. Claire can also push her release button but she will forfeit any passes.

The housemates watch Claire enter the room as the music starts and will continue to play. Rylan: “That’s my dream f£%$ing room!” Claire: “I’ve already heard this song about 50 million times. I’m sure another 50 million won’t hurt”

11.09pm
Claire has been listening to the Steps classic for the last one hour and nine minutes. Paula is alone in the garden. The rest of the housemates are talking about Paula in the living room. After four passes gained, the housemates push the button and release Claire. Big Brother tells Claire she could have earned 100 passes. Claire: “I would have stayed in there all night if I had to”. Claire leaves the diary room, “You’re all too nice. I could have won 100. I was starting to nod off. I had the pillow over my head”

1.09am
Rylan makes a discovery – finds more drinks in the storecupboard. Claire, Trisha and Rylan sneak to the igloo to drink the alcohol.