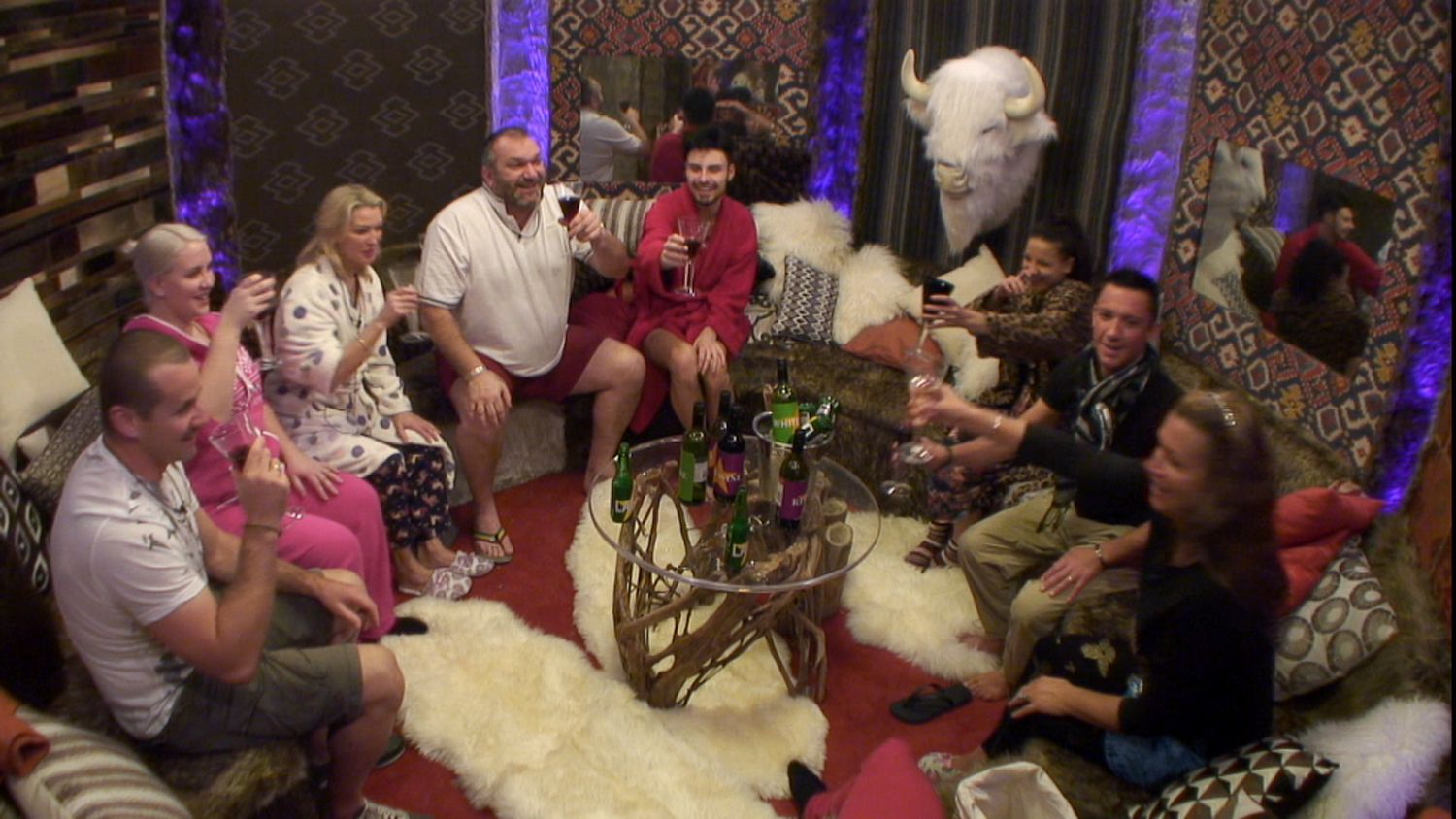 First in the hot seat is Claire.

Ryan sits on the hot seat, Big Brother asks who said the following line about Paula: “You say you’ve fallen down a ditch, she’s fallen off a cliff, you’ve done something, and she’s done something 100 times better Was it A, Gillian, B, Tricia or C, Claire”. Heidi picks Tricia and Ryan gets gunged. It’s revealed that Gillian said this. Paula leaves the diary room “Can you open the garden door Big Brother or I swear I’ll kick it” Rylan: “Don’t stress about what Gillian said”

2:18pm
Spencer, Lacey and Sam are discussing her idea for a Banghard condom range. Spencer: “You better talk to a condom company when you get out of here and get your condoms on the market”. Lacey: “Yeah man, trade marking that s$%t. Someone told me its a bit harsh, my management”. Sam: “I reckon you’ve got a market of people who will buy that for sure…Racy Lacey. Do you think a lot of girls would buy your lingerie? I reckon a lot of guys would buy your condoms. So when they’re gonna have sex with some trollop they’ve pulled from the club at 3 0’clock they will just look down at you on the condom packet to get themselves going”

Following today’s task, Paula is trying to find some calm in the garden. Gillian and Tricia are in the bathroom. Gillian: “I’d hate to think I’ve really upset her, it wasn’t done like that”. Lacey: “She was like I’m gonna get done for assault ‘cause I’m going to smack them in the jaw”. Gillian: “Me?” Claire: “Don’t you touch Kathy Beale” Lacey: “Phil Mitchell will be after you” Gillian: “Watch me when I’m sleeping. They don’t realise what they’ve done to me. They’ve put my life in jeopardy now. Watch my back, I tell you now Big Brother” Claire: “Where’s Gillian?” Gillian: “Last time we saw her she was climbing the walls dressed as Santa…I could be stabbed in the back. All I did was come into Big Brother; I said I’d be the first one out. I might be in a bleeding box!”

Spencer and Heidi are at the sofas as Paula comes in from the garden. Spencer: “Paula, you look like karate kid out there”. Paula: “I do karate, I do everything. I’m so angry” Heidi: “I wouldn’t mess with Paula”. Paula swings a large water bottle over her shoulders. Gillian: “Don’t be practising those moves on me”. Paula: “No sweetheart, no baby”

2:44pm
Big Brother has now gathered the housemates on the sofas for the results of the shopping task as the randomiser picks. Sam is chosen to push the button and a green ball is selected. The housemates are ecstatic.

5:49pm
After winning a luxury shopping budget, Claire, Tricia and Ryan are taking care of the shopping budget. Nominees Frankie and Paula are in the bedroom. Frankie: “It’s mad isn’t it. Just try to think it’s a game” Frankie leaves and Paula talks to herself whist putting on make up. Paula: “It’s not just a game. The knock on effect on life is unbelievable… You’re a jockey, what do you know. It affects everyone’s career differently…It’s called life or death…the death of a career and the life of a career. Right stop playing with your face…I do it to calm myself down…Why do you feel you need to calm yourself down…’cause I feel like I’m going mad in here”

9:55pm
Paula is in the garden. Most of the housemates are playing drinking games in the igloo. Spencer and Heidi are in the diary room “I think it would be an honour to be the first housemate evicted ‘cause at least that’s still number 1. I wouldn’t want to be the second housemates evicted and I don’t want to be the second to last evicted either. We’d want to be first or last”. Spencer: “I really don’t think the fellow housemates like us so I think it would be a relief for them to tighten up their little crew” Heidi: “I think we leave a sour taste in their mouths” Spencer: “I don’t see them calling us on the outside and if they do it they’d want to be bailed out of jail or something” Big Brother: “Do you think you could make what could be your last night a fun time” Heidi: “If it was our last night it would be a fun time”

12:03am
Paula is telling Heidi and Spencer about her fears for the future. Paula: When you try and do your best and get a hard time in the future, you just feel like, ugh” Heidi: “I think you’re on a brink of a turnaround. You’re so in control and you’re in such a positive position and that is just the beginning of that for you” Paula: “I’ve got something for you. And do not say no” Paula hands Spencer a ring. Spencer: “She’ll wear it, she loves you. Heidi this is from amazing Paula” Paula: “This is the same as mine but in pink, it’s a gift” Heidi: “No I can’t take your ring. May be I’ll just wear for the night. Its lovely. I don’t think I can take this. Are you sure, thanks Paula I love you. I’m going to find you something”. Heidi hands Paula a bracelet. “Here you can have my rose quartz. It’s absolute love and absolute greatness and you deserve love more than anyone so this is the perfect exchange. So this is infinite love and protection and greatness and divine love from God and infinitive blessings for you. So that’s for you and love is always with you” Spencer: “Got her through a lot so” Paula cries, Paula: “Oh baby thank you so much its so powerful, thank you”. Heidi: “It is, you’re welcome” Paula: “I’m ready for tomorrow, bring it on”

1:18am
Paula and Lacey are in the smoking area. Lacey: “You do scare me Paula when you have your little fits” Paula: “I’ll never hurt somebody, I have a karate licence…but when I look” Lacey: “You mean business”

Frankie and Rylan are talking about The X Factor. Frankie: “You’re being yourself but what upsets me as a viewer is the other 9 people are actually putting it on where you are genuine. But I’ve met you so I know you are”

Rylan: “Well that’s the thing I feel I’ve got to meet everyone in the country for them to go…oh…it worries me…what If I walk out and someone boos me….” Frankie: “I’m reassuring you that you’re doing well. Never change who you are”

6 minutes later. Frankie: “Be yourself your f&^*ing brilliant. We all love you” Rylan leaves the conversation and heads to the toilet. Paula: “What’s wrong with my baby” Frankie: “I think I upset him a bit about talking about the outside world. I forget he’s only 24 and I’m 42. I told him the way I see it”

In the bedroom Gillian, Claire and Tricia have rushed to Rylan’s aid. Rylan: “You get these horrible f*&king b££”££rds and I like to think I’m a nice person and I’m trying to do something for myself to do what I want in life…and I know you cant please everyone but people look at me like I’m ludicrous half the time”. Rylan comes back to the garden to sit with Paula. Frankie: “We’re you crying” Rylan: “No I wasn’t crying. For God strike me down don’t ever think you have said anything to upset me in the slightest. I’m just tired and I’ve not stopped since I’ve left and I just needed 5 minutes. Oh well it’s been a nice day. Do you know what Paula I hope you’re here tomorrow too. You keep me sane, you give me laughs…If it weren’t for you I would have gone doolally. You’re very misunderstood Paula Hamilton”