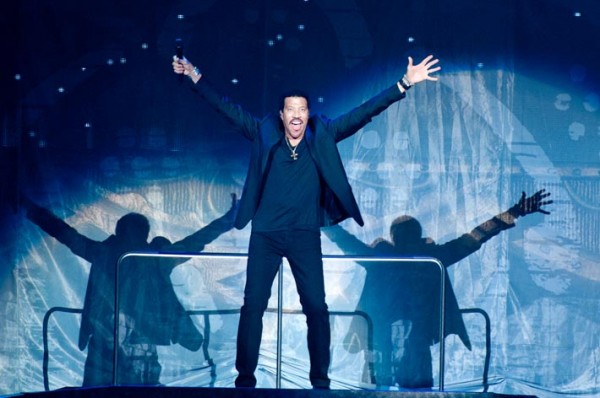 “Other than how well his iconic voice has managed to hold up over the years, the most striking thing about Lionel Richie is how, unlike many living legends, he clearly doesn’t consider himself to be above performing his iconic hits…”

Early on this evening, Lionel Richie made a promise which made the excited middle-aged female fans in the audience scream. With the smooth recognisable charm that he’s come to be known for, he promised them he would play every single hit song of his he could remember. The good news, for the many accompanying husbands who took his pledge as more of a threat, came when the 63-year-old hit-maker admitted to “remembering a lot less lately”.

Appearing on stage 30 minutes later than planned, the legendary crooner launched into a surprisingly energetic and upbeat two hour set which left even the most cynical audience members timidly singing along. Other than how well his voice has managed to hold up over the years, the most striking thing about Lionel Richie is how, unlike many living legends, he clearly doesn’t consider himself to now be above performing the iconic hits that solidified his status as a highly respected recording artist in the first place. Giving the audience what they want is something many of his contemporaries forget to do in favour of proving their ‘artistic relevance’ with almost unrecognisable live re-workings of their biggest hits, so it comes as a pleasant surprise to see him belt out nearly his entire back-catalogue of smooth and soulful (if slightly cheesy) power ballads. The audience seem to love his ‘greatest hits’ approach to the set list and thank him by joining in on everything from “Easy” and “Hello” to “Dancing on The Ceiling” and “All Night Long”.

One thing that stops Richie from becoming a performing caricature of himself is the fact that he isn’t afraid to make fun of himself. Whilst the entertaining anecdotes he tells between songs are more than likely to be scripted and well-rehearsed, he manages to tell them with such ease and sincerity that he comes across as both charismatic and likeable. However, don’t let Richie’s irrefutable charm fool you – every performance is a well-oiled machine at work and he is nothing if not the embodiment of a true professional. A class act from start to finish.