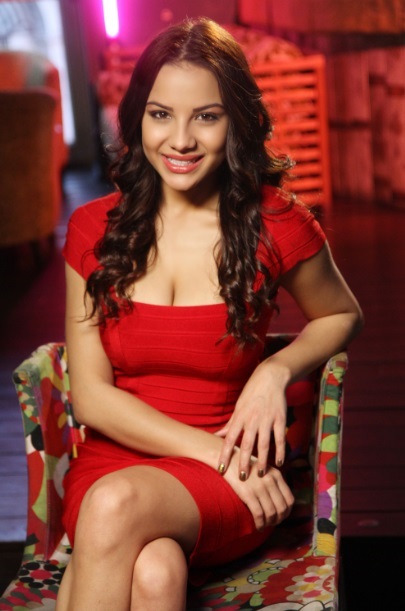 20 year old Bedford-born Lacey is most famous for being The Sun’s Page 3 Idol winner in 2011. Since being spotted in Ayia Napa, she has modelled for the likes of Nuts, Front and Loaded as well as being involved in the iconic Lynx campaigns.

Lacey has released two calendars and appeared as a Soccer AM ‘Soccerette’ with ex-CBB housemate, Rhian Sugden. The busty beauty was also in the running for the Nuts Sexiest Topless Babes award this year, getting so far in the competition because of the new confidence that came with modelling for Page 3 Idol the year before: “Modelling for Page 3 Idol has made me feel sexy and confident. I’ve never really felt like that before. I’ve never loved myself!” she said. Banghard’s mother has always been supportive of her career choices and it was actually her idea for Lacey to become a glamour girl.

Lacey’s surname attracts a lot of attention and her nickname is ‘Bangers’. When it comes to her unique title, she says ‘I’ve had every joke you can think of thrown at me. It doesn’t happen so much now – just the odd brave guy. I’m used to it. I don’t care.’ Currently single, Lacey admits that she likes a man’s man; her ex-boyfriend was a roofer. Proving that she’s got the brains as well as the beauty, Lacey has 10 GCSE’s and also planned to study fashion which she counts as one of her true passions. Lacey enjoys working with charities and would one day like to start a charity raising awareness of child trafficking.

On going into the Celebrity Big Brother house, Lacey thinks she’ll struggle with being woken up as she’s not a morning person. She’ll also miss her favourite food, Nandos.