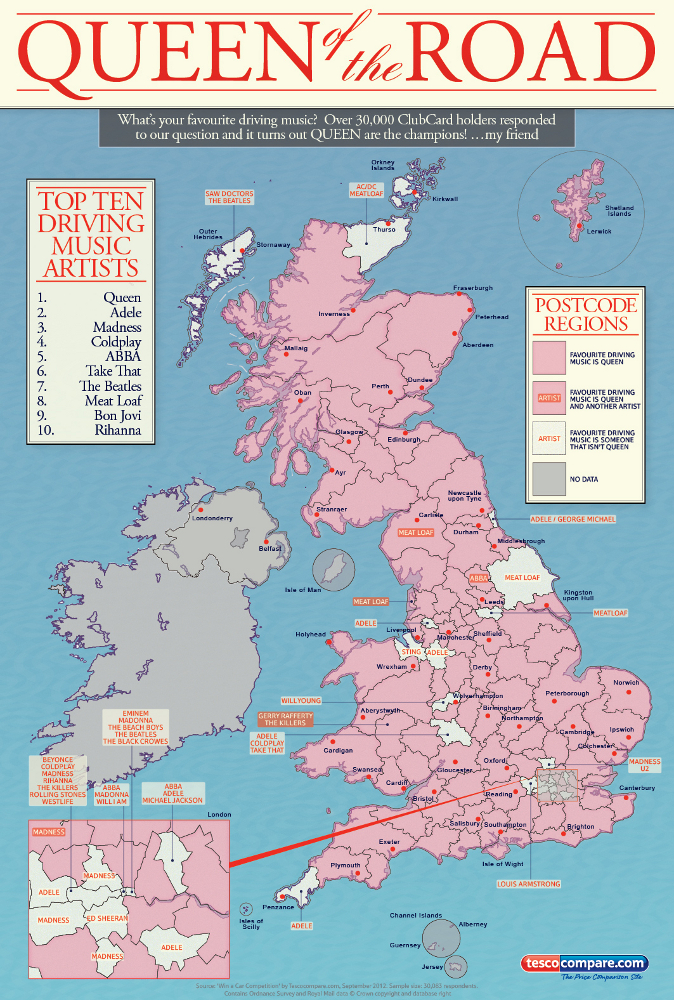 What do Brits listen to most while driving? The results of a recent competition held by Tesco Compare showed that, from postcode to postcode, Queen are the champions – and by some distance, too.

In September 2012, the comparison website launched a competition that questioned motorists on their choice of in-car music. 30,000 responded to the question, “What is your favourite song to drive to?” The results are published today in the infographic Queen of the Road. Over 75% of the country’s postal districts returned a decisive Mercury as Motor Monarch vote, almost exactly 50% more than Adele, their nearest competitor. Queen’s Greatest Hits, originally released in 1981, was recently confirmed by the Official Chart Company as the UK’s biggest selling album, with sales approaching 6 million.

The London-based rockers did not top the charts in every district, however, and the pockets of resistance make for interesting analysis in themselves. The survey showed that Adele keeps the motorists on track in Bromley, Truro, Wigan, Crewe and Southall, while she shares equal stereo time with other artists in Ilford (with ABBA and Michael Jackson), Worcester (Coldplay and Take That) and Sunderland (George Michael).

Perhaps the most unusual findings showed a small outcrop of passionate Louis Armstrong supporters at the wheel in Slough, and a loose but significant scattering of Killers and Gerry Rafferty fans populating the roads around Llandrindod Wells.

The Drivers’ UK Top 10 came in as follows:

Individual songs that scored very highly included Don’t Stop Me Now and Bohemian Rhapsody by Queen, Someone Like You by Adele and Driving in My Car by Madness.

“Despite the abundance of modern pop music, it turns out that Queen retain the audio affections of the UK’s road users,” said Gemma Whitton, spokesperson for Tesco Compare. “Personally, I find listening to music while driving is quite therapeutic and helps me concentrate on my journey. I remember that when I bought my first car, the most important feature was the stereo. These days, I have a playlist of Driving Music on my iPod.”