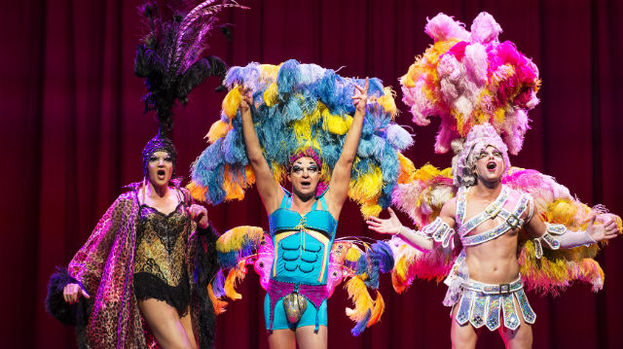 The opening night of the camp classic disappointed fans in Edinburgh with a series of first night blunders but still managed to thrill the majority of the crowd with its extravagant costumes and catchy power-pop score.

Starring West End veteran Jason Donovan as the likeable but troubled drag queen Mitzi (Tick), Priscilla Queen of the Desert looked set to dazzle audiences across the UK as it set off on a year-long tour of the country in February. Based on the 1994 film of the same name, it has an admittedly wafer-thin plot about a trio of drag performers who travel across the Australian outback to perform a series of shows at Tick’s estranged wife’s casino. Unbeknown to his two friends, Tick has an ulterior motive for taking the trip in that he has an eight-year-old son who he has never met before that his ex-wife wants him to meet.

Considering each Priscilla performance requires 500 costumes, 200 hats, 100 wigs and 150 pairs of shoes, it was never intended to be a classy and understated show.  What it lacked in depth and intelligence, it more than made up for in fun flamboyance, extravagant costumes and a ridiculously catchy soundtrack which included camp sing-a-long classics such as I Will Survive, Girls Just Wanna Have Fun and Hot Stuff.

Though it was clear from the off that the majority of the audience was there to see and support Mr Donovan, it was actually fellow (but less popular) Aussie soap star Richard Grieve who went on to steal the show as the classy and quick-witted transsexual, Bernadette. He provided both the funniest and the most poignant points in the show with ease, proving the increasing trend of touring musical productions casting “celebrities” to pull in the crowds is not always the wisest choice for them to make. Whilst Donovan played his part well in terms of endearing Mitzi to the audience, his singing voice was strikingly weak compared to his fellow lead cast members and he was completely eclipsed, vocally, by Grieve and Graham Weaver (Felicia) when the trio shared the stage for split musical numbers.

Shortly after the interval, “technical difficulties” (rumoured to be the activation of a backstage fire alarm) caused the actors to leave the stage mid-scene and the safety curtain to come down on proceedings. While issues like this are obviously unavoidable, the sudden short interruption did ruin the escapism provided by the show and it never quite managed to recover from this. Ensemble cast members also made a few minor sloppy mistakes in the latter half of the show which, again, distracted the audience and reminded them that they were watching a staged production, not friends on a wild and fun-filled road trip. One actor walked offstage when his costume malfunctioned and could be seen asking crew members what he should do rather than simply carrying on with his performance. At another point in the show, a quick-change optical illusion using several actors to depict the three leads was ruined when the cast members repeatedly didn’t run off the stage fast enough behind a black screen to avoid being seen by the audience. This may have only been a minor mishap but it ruined what should have been a really fun and entertaining scene.

Overall, Priscilla Queen of The Desert is a light-hearted and uplifting musical which will leave you dancing in your seat and belting out pop songs like nobody’s listening. Just don’t go expecting anything more than lots of glitter, men in glitzy high heels and a bloody good time.