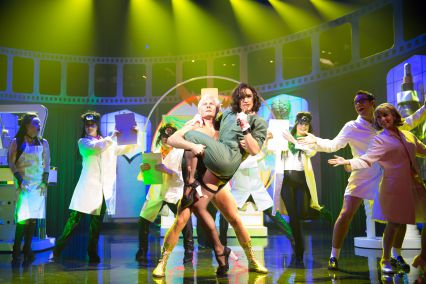 The Rocky Horror Show may not be nearly as shocking or risqué now as it was considered to be when it first opened in London 40 years ago, but don’t let that fool you into thinking that it isn’t still every bit as wild and fun. From the obscenities being yelled out by the costumed audience to the chaotic madness onstage, it’s the perfect feel-good rock n roll show for anyone that’s simply looking to have a good time.

The plot revolves around Brad (Sam Attwater) and Janet (Roxanne Pallett), a straight-laced American couple who find themselves knocking on Dr Fran-N-Furter’s (Oliver Thornton) door when their car breaks down. What ensues is a crazy and unpredictable night spent in his house (ahem, his castle) with his outlandish servants and his latest scientific creation, Rocky (a surprisingly muscular and tangoed Rhydian Roberts).

Philip Franks was superb as the narrator, consistently fending off curveballs from the vocal audience like a true professional and guiding those who were unfamiliar with the cult classic through the story from start to finish. Oliver Thornton was also fantastic as Dr Frank-N-Furter, the ‘sweet’ transsexual from Transylvania who seemed to be hell-bent on corrupting the minds of the innocent couple who had appeared on his doorstep. Even Lady Gaga would be impressed with the way in which he strutted around the stage in his heels, suspenders and corsets, but at no point did he allow any of the glitter, feathers or iconic pearls he wore to overpower his remarkable vocal and acting abilities. His entrance song -“I’m Just a Sweet Transvestite” – received the biggest reaction of the night with the crowd stamping their feet and singing along despite the fact it was one of the first numbers to be performed.

A unique musical that everyone should have the pleasure of seeing at least once.

The Rocky Horror Show is at The Edinburgh Playhouse until Saturday 16th March. For tickets or more information, visit www.atgtickets.com or www.rockyhorror.co.uk