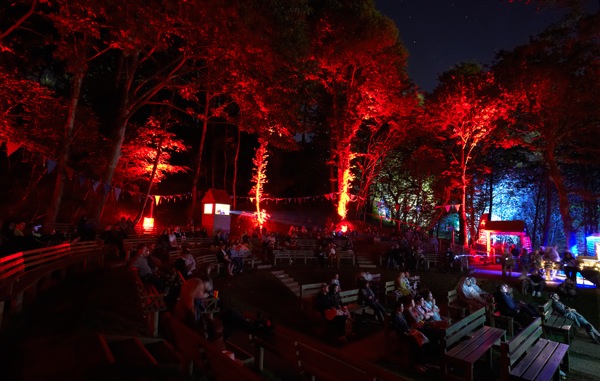 From utter legends to just about the most exciting bands around, our musical shipmates are second to none for our 10th Birthday shindig but, as anyone who’s ever been knows, Bestival’s not all about the music! If you venture into the Ambient Forest late at night you’ll find the Amphitheatre transformed into a glorious cinema with live scores, cult classics, documentaries and short films all programmed by our friends from London Short Film Festival and Branchage. With a theme for each night, Films in the Forest offers up a programme of movies that’ll move you, amuse you and in some cases terrify you.

Rob da Bank says: “The Films in the Forest were such a success last year with people raving to the Chemical Brothers Don’t Think, right through to scaring the bejesus out of themselves to David Lynch films that we had to repeat it. The films selected this year are just as cool and I’m delighted Fake Blood himself will be doing a horror soundtrack and the hip-hop night looks ace too… see you in the Woods.”

Thursday night is all about Musical Journeys and will see woozy dream-popsters Gum soundtracking the 1916 version of 20,000 Leagues Under the Sea, plus there will screenings of Dave Grohl’s recent Sound City documentary and Karl Hyde and Kieran Evans’ The Outer Edges. Friday’s theme is Rapper’s Delight in honour of the super-fat hip-hop action Bestival has got going on this year. There will be bumping beats supplied by DJ Woody who will be throwing down his Big Fat 90s Mixtape AV Set and you’ll be able to catch genre classic Beat Street and a secret film showing a hip-hop don as you’ve never seen him before…

Saturday is Fright Night so who better to rescore horror masterpiece, Suspiria than Fake Blood? And that’s not all as you’ll be jumping out of your skin if you stick around for Sam Raimi’s gore-fest Evil Dead II. Wrapping things up on Sunday with an Outsiders theme we’ll be delving into the lives of some true non-conformists with a double bill of hedonistic sagas. The ultimate counterculture movie Easy Rider sets the tone and David Cronenberg’s unique take on Naked Lunch takes us to the outer limits!

Look out for London Short Film Festival short films, which will play each night in support of the main features and keep an eye out for the Films in the Forest popcorn vendors, who’ll be on hand with award-winning nibbles cooked up by Joe & Seph’s Gourmet Popcorn.