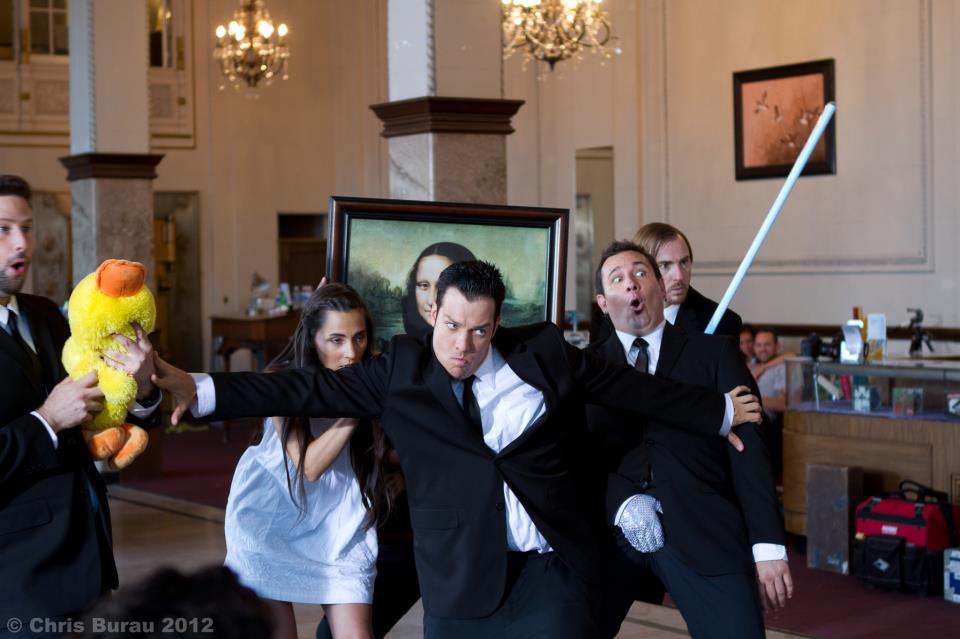 If there’s one band we never grow tired of here at Flecking Records, it’s Army of Freshmen. With their brilliantly catchy tunes, their cheeky charm and their handsome punk-rock looks, we can’t get enough of ’em.

Lucky for us, AoF are heading to the UK this month for a few tour dates before returning later in the year for a full tour.

With their plane due to leave for our shores any day, and an awesome new music video inspired by heist movies, we had a chat with multi-talented front-man Chris Jay.

Hey Chris, how are you?
I’m really good. Busy getting ready for the tour but we’re a few days away from flying so I’m getting excited! Lots still to do though. I have Impact Wrestling in the background on TV, sitting on the living room couch and wiped out from a long but productive day.

You’re heading over to the UK for a few shows this month – excited?
Yup! We don’t tour as much as we used to so when we get to, it’s kind of like vacation on steroids! Things can get a little crazy in a good way.

What can fans expect from your trip?
Fun. From the shows to the after parties, we are coming to have fun. I guarantee if you come to any of the four shows we play, be it the headliner or the festival sets, you will see a band that is absolutely having a great time. We don’t pretend to be pissed off because it sells records and let’s be honest, there’s a lot of that these days. I mean how mad at the world can you really be when you’re getting thousands of dollars to play a festival?

Will you be back soon for a full tour?
Yes! Game plan is to come back this fall for a longer run. Hopefully some opportunities come up from this trip, usually one visit leads to the next so fingers crossed.

What is your favourite thing about touring in the UK?
Favorite thing is how UK peeps spell favorite with a U! Other than that, the vibe at shows is better. More of a culture so to speak. Plus after 10 visits and almost 10 years of going over there, we have lot of friends that we look forward to seeing everytime. Also, Wagamama is one of my favorite restaurants, I’ll probably eat there every single day we’re there! What else? I like the history of the country. I like seeing the historical sites. I’m a nerd like that. I’ve gone on a bunch of Jack The Ripper walks and what not.

And your least favourite?
There you go with the U again! Well, it’s no secret outside of Wagamama and Nando’s, we’re not very big on the food there. Especially late at night when we’re starving and all there is is Kebab shops. We’ve spent many a night powering down some seriously unhealthy food there! Also, the weather can be really depressing. When it’s dark and rainy, you feel like it’s always night time. Hopefully we won’t get that in April though.

Do you have any top tour survival tips?
You’ll be drinking a lot so make sure to always have a bottle of water before you crash and two aspirin. Also sleep, it’s hard but you have to get sleep when you’re playing, partying and travelling so much. Also be nice to your fellow band members, one grumpy, tired guy saying the wrong thing to another grumpy, tired guy can set off a chain reaction of bad times.

What does a band need to do to survive in the current market?
Record and perform because you love to do it not because you want to make money or become famous because both of those things are becoming almost impossible for bands. It’s a big subject but the industry we started in is now almost completely gone.

Do you find UK fans differ from US fans?
Yes. A little more passionate overall. A little more dedicated. For instance, the US could never have a monthly magazine devoted to one genre like they have in the UK but I will say this, I’ve noticed a trend that UK fans are starting to become a little jaded like their US counterparts. Hoping it’s only temporary! Don’t drink the too cool for school Kool Aid!

We’re loving your new track, Ava. The video is fantastic! What inspired you to make it?
Why thank you. I was running an errand at my day job and had to stop at this building that used to be a bank like 100 years ago. Beautiful old historical building right in downtown Ventura on Main Street. It’s where Perry Mason was created but that’s another story. When I saw they had an old fashioned bank vault, I was like, ‘man this place would look great in a video’ that’s when the inspiration hit to make a heist/bank robbery video and we polished the concept up from there. Really, really happy with it. Always felt our videos were really quality for an indie band. We put a ton of advance work into them. Hours and hours. Casting, props, we do a ton of it on our own. We try and make mini comedy movies with characters instead of the usual band standing in cool place with cool lights trying to look cool.

What’s your favourite heist movie and why?
Great question! Well the first Ocean’s 11 is amazing. My friend in the UK, Teresa reminded me of that today actually! The sequels were stunningly bad though. That Julia Roberts character looks like Julia Roberts shit was so cheap that I can’t believe they even tried to pull it off. The actions sequences in Heat are great, the family drama not so much. Dog Day Afternoon is brilliant vintage 70’s cinema. Little depressing though. I’d say the ultimate is Point Break, ridiculously awesome plus Gary Busey rules.

You’re involved in music, journalism, acting, screenwriting… You seem to be a jack of all trades, and a master of them all. Apart from AoF, what are you working on at the moment?
Ha! Thanks. Definitely got a lot of irons in the fire but getting them to catch fire is another story. Well there’s two things I’ll be spending a lot of time on this year and I’ll announce it here for the first time. Aaron Goldberg, our guitarist, and myself have written a script for comedy film called, Baker’s Dozen and we are actively in the early stages of production, ie. fund raising, to try and get it filmed. It’s a total raunchy guy comedy but we’re really happy with the script. Hopefully we can find a way to get it made. Also we have our adult cartoon, The Spank Finatra Show, long-time project but looks like we’ll be animating a pilot this year which has been a big goal for us. I think if Spank every gets a chance, it could be huge. I truly believe that. Getting cartoons launched though is really difficult!

Festival season is coming up – do you have any planned yet?
Yes. Hit The Deck. Next week. Be there!

Will you be attending any?
You know, I really like playing festivals but just attending them is another story. Coachella which is a big one in the States is this weekend and we opted to play a local show. Festivals at least in the states can be a nightmare. The traffic. The parking. The over priced everything. The where to stay. The where not to say. The where you end up staying. The sun burn. But again, I’d play one any day of the week!

What would your dream festival line-up be?
Was just asked this yesterday in an interview so I will go with a totally different line up for this interview. The other I just picked my personal favorites. This time I’ll pick an all AOF festival. For Owen, I’d book Ben Folds Five and Paul McCartney. For Aaron, I’d book The Old 97s and The Get Up Kids. For Dan, I’d book The Hippos reunion and Weird Al Yankovic. For Kai, I’d book Slayer and the Foo Fighters. For Jimmy, I’d book, well he’s the new guy, so he doesn’t get a pick. I’ll take his picks and book a Downset reunion, They Might Be Giants, Arlo Guthrie and Weezer but they can only play songs off their first two records!

What are your plans for the rest of the year?
Bandwise, to rock the UK this month. Play some regional shows this summer. Hit the UK again in the fall and make a new video this year. Personally, keep up the getting in shape. Been doing good so far, cut out soda and sweets and have been hitting the gym. Want to see what happens if I keep that up all year perhaps, I’ll try out for the Olympics in one of the easy categories. Professionally, really want to see the movie and cartoon get launched. I need more creative projects that make no money in my life, apparently I don’t have enough right now.