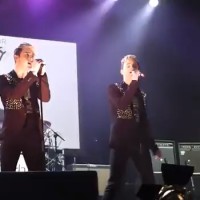 The wonderful Jedward put in an awesome performance at the benefit night for Aslan front-man Christy Dignam, who is battling cancer.

Before the gig, Aslan guitarist Billy McGuinness revealed that they would be backing John Grimes and Edward Grimes.

“Jedward backed by Aslan? To quote one of our biggest hits, It’s A Crazy World, but yes, it’s true,” he told the Herald.

“John and Edward approached the committee organising the Christy show and asked if they could help and we agreed.

“We’re grateful to have them on the bill. Aslan fans should be, too, and the band will be rehearsing with Jedward next week, which should be interesting.”

Check out the delightful duo singing She’s So Beautiful in the fan captured video below.