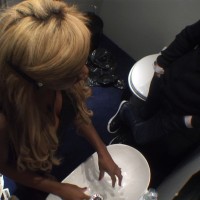 Day 19 in the Big Brother house…

Here are the highlights from day 19:

* Gina and Dexter discuss nomination strategies and statistics in the toilet.
* Dan and Hazel discuss their opinions of Dexter in the bedroom.
* Dexter tells Dan in the bedroom that he has gone up in his estimations, and that he has seen that he thinks logically now which has improved his opinion of him.
* Jackie and Dan discuss tensions in the house; they liken the atmosphere to a playground or prison. Jackie remarks that she feels like a headmistress in a school being in the house.
* In the garden, Charlie and Dexter discuss the nominations taking place later that day.
* Gina, Dan and Dexter are told by Big Brother that they must go to jail for discussing nominations the night before.
* Big Brother announces to the house that they can retrieve their family photos from the store room; the housemates in jail will not be receiving their photos.
* Callum and Sam discuss their favourite celebrity women.
* Recap of last night’s live nominations from the house: Wolfy, Dan, Dexter and Gina are all facing eviction Friday night.
* Charlie tells Jackie in the kitchen that she should not be so b*tchy when nominating and that she should tell people how she feels about them when it happens, not hold it in until nominations take place as it will come as a shock to the other person.
* Gina, Dan and Callum discuss nomination reasons and Dan feels that Callum should have given a better reason for nominating him. Callum states he has had more conversations in the past three weeks with Gina. Gina backtracks on something that Callum said she previously said to him – that he was the only person in the house that she hasn’t said a bad thing about in diary room.
* In the garden, Gina, Dexter and Dan discuss how they feel that Callum has an awkward niceness. That he is not genuine and is playing the game too much.
* Wolfy tells Dexter that she is his biggest competition in the house and that everyone knows she is going to make it to the final.

Tune in to Channel 5 at 10pm to watch the full show.