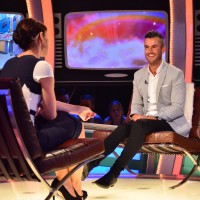 ‘Detective’ Dan Neal was the fifth housemate to be evicted from the Big Brother house of 2013.

In a shock twist host Emma Willis revealed live to the house that the three housemates in the Safe House, Dan, Sophie and Sam were in fact, not safe; they would be the ones facing eviction, instead of their fellow housemates as Big Brother had led them to believe. “I knew it,” exclaimed Dan as his name was announced.

Ex-policeman, Dan, 33 left the house to mostly cheers from the live audience at the Elstree studios. He later told Emma, “I’m actually fine, the whole thing is surreal anyway but I suggested this kind of thing would happen. I knew if I was up against those two I’d go. Sam and Sophie in our eyes are two of the favourites.” Dan said that he felt “cheated” to be out.

Emma mentioned that during his time in the house Dan was always “ahead of the game.” “I couldn’t switch off as soon as I got (actor) Michael right,” he added.

On Dexter, Dan commented, “He doesn’t even know who he is, he’s a really mixed up person, I think he’s a bit lost, and about Callum, “I just felt a lot of awkwardness about him, then he turned a bit cocky, nothing comes natural (to him.”

On his time in the house, “I said what I thought and everyone knew where they stood. I think in the house people respected my opinion, I have that confidence to say what I think.”

On twins Jack & Joe: “Sometimes they feel like they know everything already, they don’t take people’s advice on board.”

On best friend Hazel: “She’s funny, she doesn’t take herself too seriously, I know me and her will be really good friends when she comes out. I think she may struggle (in the house) without me.”