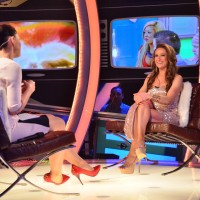 Jemima is the second housemate to be evicted from the Big Brother house.

After being shown her nominations Jemima told Emma that she was really surprised that Charlie and Daley had nominated her.

On Gina saying she was fake “That’s what I said about her. We feel quite mutual about each other.”

On Dan “Both our personalities are strong, characters are strong, we have a love/hate relationship. He speaks his mind and what he thought of me.”

On Sam “I really saw him as a boy mate.”

“I am so much wittier and entertaining in real life.”