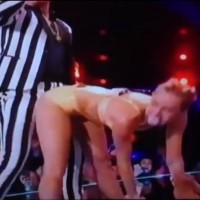 Adam Lambert has offered his thoughts – and some much needed perspective – on Miley Cyrus’ raunchy VMA performance.

The lovely Adam Lambert is no stranger to controversial performances though, so he took to Twitter to share his thoughts.

“And listen if it wasn’t ur cup of tea— all good but why is everyone spazzing? Hey – she’s doin something right. We all talkin,” Adam tweeted.

“Hold up! I didn’t actually state whether or not I liked @MileyCyrus performance. I merely said she was having fun and to cut her some slack”

“Whew folks are all heated bout this. Hilarious. I can’t help it that I’m a contrarian — just another healthy debate.”

What do you think of Miley’s performance? Leave us a comment.