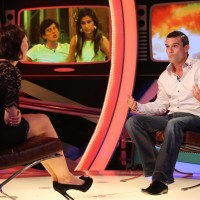 Tonight, Callum Knell was the sixth housemate to be evicted from the Big Brother house of 2013.

Emma Willis revealed live to the house that the housemate with the most votes, and sixth to be evicted is Callum.

Sports Coach Callum, 28 left the house to mostly cheers from the live audience at the Elstree studios. He later told Emma, “I’m not surprised at being evicted, it was either going to be me or Hazel. I’m absolutely gutted, best thing I’ve ever done and didn’t want it to stop.” Callum said that it was a ‘blow’ when he found out that Charlie had nominated him, and confirmed he thinks ‘she is a lovely girl’ and caught his eye regularly.

On Dexter, Callum commented, “He’s playing a game plan, false and a snake. I tried not to let him get under my skin, he’s clever. He’s playing such a game and manipulates people’s emotions.”

On Sam, “He deserves to be here. S*d everyone else, it took him a while to trust me and I’ve told Gina to look after him. I think he will connect most with Gina now, she lets him finish a sentence.”

Tune into Big Brother tomorrow, 10pm on Channel 5 for the latest from the house. Housemates’ Friends & Family will be nominating this week.