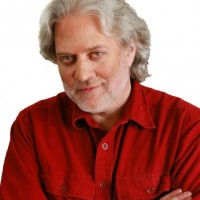 One of the best things about The Fringe is that it often gives audiences the chance to see well-known comedians, actors and musicians perform in small and intimate venues. In keeping with this great tradition, legendary musician and Fringe veteran Dean Friedman (this is his ninth year performing) has set up camp at the city’s luxurious Apex Hotel with his Words and Music show.

Bouncing onto the small stage in a bright Hawaiian shirt, Dean greeted the audience before launching into a set comprising of both old classics and new material, intertwined with friendly chitchat and explanations of what the songs were written about.

Whilst watching him perform, the most striking thing about Dean Friedman as both a songwriter and as a live performer is how clever and witty he really is. Songs like Death to the Neighbours and McDonald’s Girl successfully straddle the fine line between comedic genius and catchy pop song whilst the audience’s reaction to his acoustic renditions of well-known hits Ariel and Lydia prove his songs still have widespread commercial appeal.

A fantastic way to spend an August evening in Edinburgh.