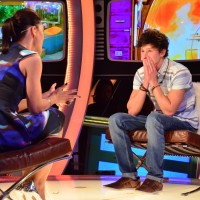 Sam Evans has been crowned the winner of Big Brother 2013. He came out to a rapturous applause from the live audience.

Sitting down with Emma, Sam told her that “he couldn’t believe it” and he was “shaken”.

On his winnings Sam told Emma that he was going to give 25% to charity, 25% to his family and friends and keep 50% of the money to go towards his future to make sure it is secure.

Dexter, this year’s runner up, left the house to cheers from the live audience. Dexter told host Emma Willis that he “never in a million years” thought he would make it to the final and come second. Dexter went onto say that he ”was chuffed to make it to the final”. Dexter admitted to Emma that he was a risk taker.

Dexter told Emma that when he came out of the safe house and back into the main house “something cleared in my mind and I knew who I was.”

On his housemates “there were people that would give me a time of day. I had never felt that much love.”

Tune in to Channel 5 on Thursday night at 9pm for the launch night of Celebrity Big Brother.