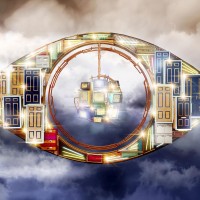 The first three housemates will enter the house and be called to the diary room. Big Brother will explain to them that they are now members of ‘The Cult of Celebrity’. They will then be sent down to the Cult Temple Room where they will don gold special cloaks and pendants.

Big Brother will inform the housemates to take their seats in front of the eye shaped plasma screen.

The eye on the screen will pulse as the voice of Big Brother explains to the Cult members that they must live in secret in the Cult Temple for the next 24 hours, where they will be watching the other housemates through the all Seeing Eye screen. Big Brother will also explain that they will have to make an important decision. Tomorrow, they will be tasked with choosing which housemate that is not part of the Cult should face the first eviction.

The Cult of Celebrity will then watch each housemate’s intro VT, and be able to watch the reality from the inside the house to aid them in their decision.

At the end of the live show the housemates in the main house, who are not aware of the three secret cult members, are given a group dilemma. They must decide between themselves which two housemates are the most famous.