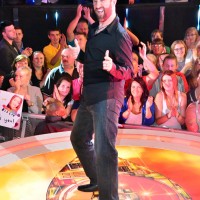 Tonight, Saved By The Bell’s Dustin Diamond and Coronation Street’s Bruce Jones were the fourth and fifth celebrities to be evicted from CELEBRITY BIG BROTHER SUMMER 2013.

Dustin left the Celebrity Big Brother house to unanimous cheers from the live audience. When Emma spoke to Dustin he was excited to speak to his wife: “As soon as I get my phone it’s FaceTime”. Emma asked what he’d miss from the house: “The only thing I’m going to miss is the weird things that Big Brother throws at you. But the relationships I’ve made will stand the test of time”. When asked about Louie: “He’s very extraverted but also very shy”. When asked about Lauren: “She has such a soft heart….either Lauren or Abz should win.”

Bruce left the house to a warm reception from the live audience. When interviewed by Emma, Bruce said: “After 16 days of not seeing faces it’s so great to see faces…I think I’ve done well for 16 days. When Emma asked about his on-screen wife Vicky: “It made it very easy for me and Vicky as we were going in as a pair”. When asked about what he’d learnt from the house: “Patience is a great thing…I wasn’t a very patient person, but there’s a lot to lose”. And on who he backs to win: “Mario or Charlotte but I’ve got a big feeling Lauren has a big chance”.

Coming up on Celebrity Big Brother…Tomorrow, Vanessa Feltz enters the house for a special task. On Sunday, the housemates will double up for the day and they’ll nominate in pairs, and on Monday Danielle and Sophie return to thrash it out!

Join Emma on Wednesday night for the semi-final of Celebrity Big Brother at 9pm on Channel 5.