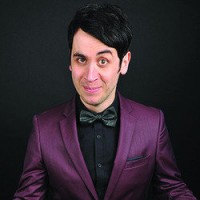 With the release of Now You See Me popularising the ever-controversial art of magic once again, it comes as no surprise that Pete Firman’s Scoundrel has been a sure-fire hit at this year’s Fringe.

What immediately sets Firman aside from other magicians performing at the Fringe is his ability to genuinely entertain his audiences with light comedy between tricks. He is as funny as he is quick with his hands and this swiftly proved to be a winning combination for his sold-out audience.

As evident from a video played during the show, Pete’s interest in magic spawned from a young age. It’s obviously taken him a long time to perfect his routine yet at no point does it come across as overly scripted or insincere.

If you can’t decide whether to go and watch comedy or magic, don’t hesitate to take Pete Firman up on this two-for-one offer!