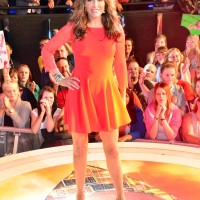 Tonight, model Sophie Anderton was the third celebrity to be evicted from CELEBRITY BIG BROTHER SUMMER 2013. Sophie came out to boos from the live audience.

When Emma asked Sophie about being booed, she said “I’ve watched the show many times, its pantomime”. Emma asked if Sophie was surprised to be out of the house and she said: “No, not at all, I’m probably one of the most boring housemates and I never wanted to win. I went in for the experience”. When confronted about her bossy, know-it-all moments in the house Sophie said: “I’m a strong character…but watching it back makes me cringe, I hold my hands up”.

Join Emma on Friday night at 9pm on Channel 5 for a double eviction.