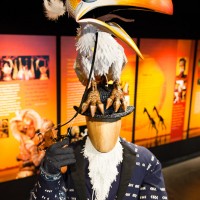 To celebrate the fact that Disney’s The Lion King is set to arrive in Edinburgh for the first time next month, musical theatre fans are being given the chance to see props, puppets, masks and costumes from the £3.2 billion hit show at an exclusive exhibition in the capital.

The exhibition, which will also include interactive video screens and exclusive interview clips with the cast and crew, will be held at the City Art Centre in Edinburgh from Saturday, September 28.

Richard Lewis, the City of Edinburgh Council’s Culture and Sport Convener, said: “We’re delighted to be hosting Exploring The Lion King at the City Art Centre this autumn. There’s been a huge amount of excitement surrounding the arrival of Disney’s musical since it was announced earlier this year that it would be coming to the Edinburgh Playhouse. The exhibition will be the perfect complement to the much-loved stage show and is a fantastic opportunity for everyone to see the beautiful costumes and puppets up close and in the most idea venue in the city.”

The show, which continues to enjoy a successful West End run at London’s Lyceum Theatre, made headlines earlier this year when fans queued up for hours to secure good seats. The Lion King has been seen by over 70 million people worldwide and is widely considered to be one of the best

Exploring The Lion King will be hosted by Edinburgh’s City Art Centre from Saturday, September 28 for fifteen weeks. Entrance to the exhibition is free of charge.

A limited number of tickets are still available for selected performances of The Lion King at The Edinburgh Playhouse. For tickets and more information, visit www.thelionking.co.uk.