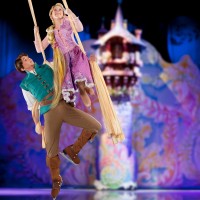 It’s hard to believe it’s been 75 years since Disney Princesses first graced our screens. In honour of the legendary brand reaching this incredible milestone, Disney on Ice have created a brand new touring show that centres around the stories of Snow White and the Seven Dwarves, Cinderella, The Princess and the Frog and Tangled. Entitled Dare to Dream, the stunning show successfully manages to merge timeless Disney magic with modern technology to create an enchanting enactment of the fairy tales that will entertain both adults and children alike. On Friday, the show played to a full-house at Glasgow’s Braehead Arena, with hundreds of kids excitedly turning up in their best Disney costumes.

The show’s famous hosts – Mickey, Minnie, Donald and Goofy – kicked off proceedings to huge applause before an extensive cast of talented skaters burst into a colour and lively, if slightly short, performance of The Princess and the Frog. Next up was Snow White and the Seven Dwarfs, who proved to be the most popular characters of the evening. Heigh-Ho inspired the audience to erupt into a massive sing-a-long, with many little ones bouncing along in their seats as a few lucky competition winners were transported around the stage in a mine train.

During the Cinderella segment, the classic Princess and her Prince Charming were outshone by her two “ugly sisters”, who had the audience in stitches from the moment they clumsily skated onto the rink. However, it was the cast members portraying Rapunzel and Flynn Rider who stole the show with surprise acrobatics that were almost as seamless as those performed during Cirque de Soleil.

Gasps could be heard throughout the arena as the pair flew above the stage, seemingly only aided by Regular appearances by Mickey, Minnie, Donald and Goofy mean that even those with no interest in Disney Princesses can enjoy Dare to Dream. With every cast member bursting with energy, strength and grace, Dare to Dream is a stunning spectacle that is not to be missed.

Dare to Dream is currently touring the UK until January 2014. Click here for tickets or more information.