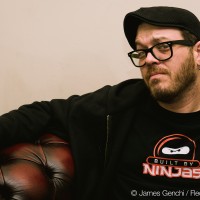 When I heard that Bowling For Soup were planning on making this UK tour their last, my heart was on the verge of breaking. Having seen them every year for as long as I can remember, the thought of them not gracing our shores twice a year was one I didn’t even want to consider.

Thankfully, when I sat down for a chat with Erik Chandler before their Leeds show, he assured me that they would be back, both as a band and with their side projects, and thankfully he told me this before I started crying on him. He also hinted at a secret project that fans can look forward to in the near future.

We also chatted about support band Patent Pending, his favourite UK memories and – of course – one of our legendary UK slang tests had to happen.

We can’t believe this is Bowling For Soup’s last UK tour! Do you have a coping mechanism for distraught fans?
It hasn’t been that bad. The first show that we did was an acoustic gig in London, and when we did the meet and greet, I was a little confused when people started coming in. Everybody seemed to be taking a little longer and everybody seemed a little sombre, and then I realised that this is the farewell tour. Once I got my head around that, everything was cool.

Is it emotional for you guys, knowing this is your last tour?
It’s… yes and no. The last show is going to be tough. For the most part, you don’t really have time to consider that because everyday you’ve got so much to do and then you play a show. It’s working time until you get to show time, and then you’re all full of adrenaline and you drink yourself stupid on the bus.

Why was now the time to stop touring in the UK?
Time wise, it made sense. After the tour last October, just before Christmas the four of us got together, sat down with some beers and started talking, and it seemed like the right time to chill out and not be touring in UK quite as much. Over the last thirteen years I have been in the UK at least twice a year and I think this tour is number 32 for us in this country. We wanted to leave on a high note. I would hate to be those guys that run the band into the ground and tarnish the good memories that the fans have, and even more importantly than that, for me to tarnish my memories of what we’ve been able to accomplish in the past.

Why are Patent Pending the perfect band to help you say goodbye?
Those guys are our little brothers. That band is us, ten years ago. There isn’t another band who would have been a better fit to tour with us.

Will you guys be coming back with your other projects?
Absolutely! And Bowling For Soup will be back for festivals and short stints – things like that, it’s just we’re not going to be on tour for a month at a time.

Do you have a favourite memory from your time here?
Shooting our first live DVD at Manchester Apollo, in front of a sold out crowd was pretty fantastic. The first time we played the main stage at Download – to walk out on stage and see a sea of 80,000 people in front of you… you can’t comprehend that at the time, and then you go back and you see photos of it and it’s like “oh my God…” Whether you’re playing for 300 people or 80,000 people, you still pick out three people to concentrate on, so that’s where your attention goes and everything else becomes a big blur. To go back afterwards and see pictures of what you just did is kind of humbling.

What can UK fans expect next?
We’ll be back next year for… some things – that’s about all I can say, we’ll be back next year. We’re doing something I can’t really talk about right now. Jaret’s side project, People On Vacation, are coming back in November and then again in April with Patent Pending. Hopefully I’m coming back over to tour with my solo project next year. Lots of stuff coming up. BFS has plans to do two CDs and three DVDs next year, there’s no end in sight. We’re just slowing down the touring a bit.