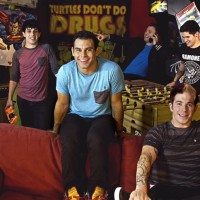 Patent Pending are the band that Bowling For Soup have chosen to help them say goodbye to the UK on their farewell tour. Sad news about BFS, but great news about Patent Pending who we can’t get enough of.

If you like BFS then you will love Patent Pending, but while they have their similarities, Patent Pending are entirely unique. Until I saw them live for the first time, I hadn’t ever seen a real band with instruments break into a dance routine mid-song – let alone one as well choreographed and as well executed as the one Patent Pending do in Anti-Everything.

What’s refreshing about Patent Pending is that you can’t help but pick up on the fact that this is a band that are doing what they do because they love music – everything from making it to the effect it has on other people.
Their set is both entertaining and heart-warming. Front-man Joe Ragosta can go from having you in stitches one minute to opening up about the friend he lost to suicide the next, not only raising awareness but reminding the audience that with music and good friends to take care of you, there is no problem that can’t be solved.

I sat down for a chat with the lovely Joe to find out what he has learned from BFS, what the band have planned for the tour and, as always, to quiz him on his British slang.

How is the tour going so far?
Every single day is better than the one before it. After the tour we did with Bowling For Soup last October, we were certain we’d never be able to do a tour that great again, and every day this one gets better. It’s incredible.

How does it feel to be that band that is going to be seeing Bowling For Soup off from the UK?
I’m going to cry, right now, just because you asked that question. It’s a privilege. We grew up listening to this band all the time – they were one of our favourite bands. Now they take us on tour, Jaret [Reddick] manages us… it’s incredible. So every night I promise myself I won’t cry until Liverpool, but it’s getting harder every night.

A lot of people are saying that you guys are going to be the ones who fill the gap Bowling For Soup leave when they decide to call it a day.
I don’t think anyone could ever replace them, because they are the greatest.
Not replace them, just fill the void.
We can try and fill the void. We would love to, and it would be an honour to try and step in.

What’s the most valuable thing you’ve learned from them?
[laughing] We talk about this on stage all the time. Jaret is our manager now, so every day he gives us real lesson. We learn lessons from him whether he’s trying to teach us or not. Also, he gives us fake lessons where he comes in and says “Hey, Anthony, you look stupid” and then he says “managed” and walks away. I think the greatest lessons that we learned from Bowling For Soup is something that we kind of knew, but never really saw in real life, and that is to just be yourself, do what you want to do and have fun, because music is… a terrible business! And if you’re not having fun, and you’re not doing what you love and when you believe in, there’s no point in doing it. They are a band that embody that every day, and it’s really cool to know that we’re not alone in that, and that it can work for people.

Is there anything you’ve learned not to do from them?
Yes! Very seriously, on the first day of the last tour they were like “do not fuck up the name of a city in the UK” and last year in Birmingham I called them Belfast and it did not end well. Since then we’ve patched things up, and every time we play in Birmingham they all say “fuck you, Joe” – it’s really funny.

I don’t think I’ve ever seen a proper band with instruments do a dance routine mid-song before…
We’re a band who kind of do whatever we want. We’re not exactly a punk band in that we’re like [shouting] “oi oi oi, the government, oi oi oi” but we are a punk band in that we just don’t fucking care what people think. We want to do what we want to do, and I thought it would be hilarious to put a boyband breakdown in the middle of a song, which we did in the song Anti-Everything, and we thought it would be even funnier if we danced like a boyband when that happened. That attitude kind of carried over to the new album, Brighter, which came out last week [leaning in to the dictaphone] available in stores now. I bought one at HMV today, which was awesome. But anyway, we don’t follow the rules of the punk scene or the pop scene or the rock scene – that’s kind of how that song came about.
It’s strange, because it should be funny but the dance routine itself is just really good. It works! It shouldn’t, but it does.
[laughing] No one has ever said that it’s actually good, that’s really funny.

What else do you have in store for us on this tour?
We’re going to be playing some new songs, hanging out hard – which is always the best part – and we’re going to be doing some stuff in the Bowling For Soup set. We have a tour in April with Jaret’s other band, People On Vacation, so we’ll be back.

While you’ve been here, have you encountered any words that you haven’t understood?
Yes. Knackered, but I get it now, and just little things like doing the “duck and dive” – I don’t even know what that means, but I get it now.
When we first met Ryan [Hamilton] he’d just learned the word dogging – do you know what that means?
I just learned what that means, and that’s gross.
Well it started a tradition, so we have a couple of other words to test you on.
I remember doing this last time! I’m ready!
Do you know what a cock up is?
A cock up? A competition of men?
It’s a mistake. Do you know what a tosspot is?
Is it like a stew?
A tosspot is an idiot. The dog’s bollocks?
It’s balls, like, it sucks.
It means something is good.
Oh dammit! So it’s like tits? That’s the tits.
Yes. Do you know what bonk means?
To hit your head or something?
To bonk is to have sex.
Whoa! [To Corey] Corey, I’m going to bonk you later.
Do you know what a chin wag is?
Oh man. Is it a dental term?
It’s a chat.
Whoa! A chat! Cool.
Doddle?
Doddle means mess about, like taking your time… right?
If something is a doddle, then it’s easy. Do you know what gagging means?
No…
If you’re eager for something, you’re gagging for it.
Oh, you want it. [Joe has a realisation] That tweet makes so much sense now! What the bonk does that mean?!
Do you know what gutted means?
Yes, it means upset.
If you have the hump with someone, what does that mean?
The hump? You have sex with them.
It means you’re annoyed with them.
Like Hump Day in our country – Wednesdays are annoying.
Do you know what jammy means?
Pyjamas?
Lucky.
Oh, I’m very jammy.
Cackhanded?
Tongue tied?
It means clumsy.
Oh, you’ve just taught me so much!