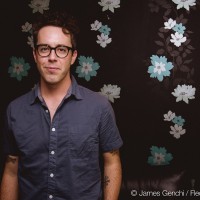 Ryan Hamilton is a man of many talents. From Smile Smile, People On Vacation and his solo work to making his own videos and art – is there anything this man can’t do?

Ryan is currently a part of the Bowling For Soup farewell tour, helping the legendary punk rockers (including his People On Vacation bandmate Jaret Reddick) say goodbye to the UK in style.

We had a chat about what he’s working on at the moment, his plans for the future and – of course – one of our trademark British slang tests.

You’ve just come out as this secret artist that no one knew you were – how did that happen?
Well, everybody has dreams of their band being huge and successful. I was in Smile Smile and we almost did that, especially in the States and Canada, and I didn’t know what to do with myself when that started to fall apart… and then People On Vacation happened. I think I lacked the confidence to do it by myself for a little while. Jaret [Reddick] had a really big role in telling me “you’re good at this, you can do this” and I think being in People On Vacation gave me the confidence that I never had before. It’s been a surprise for me to be able to do it and believe in myself enough to do it.

What inspires your work?
I’ve always been… I don’t want to say talked down to, but in Smile Smile I would bring an idea to the table and it would be shot down immediately and then kind of re-imagined in a way that made Jencey happier. So to bring my own ideas and to the table – and them not change – is something that I’m really enjoying. I’m defensive with myself now because I can’t help it, it’s a habit after so many years. It has always been a sort of therapeutic journal, it all comes from somewhere personal. I’ve never been able to sit down and write a song just for fun, so I guess – to answer you question in the longest way possible – it’s my vision and what I want to say musically and lyrically, unedited for once. It feels really good.

Did you always want to be a musician?
I didn’t, what’s really funny is that I went to college on a golf scholarship. I went to Abilene Christian University to play golf – I never played an instrument or anything. Then I hurt my back… Everyone wants to be a rockstar, so I just woke up one day and decided that I would teach myself guitar. I got a really late start and a lot of really coincidental things fell into place – it still feels like an accident, ten years later.
It seemed strange at first, but I can see you as a golfer. I can see you in the outfits.
[laughing] It’s funny now because Jaret and I play together and people give him shit, like, “what are you doing? You don’t go to the golf course” – maybe I’m a bad influence?

How is the music going?
It’s going really good. People On Vacation has been the coolest surprise of my life. My solo stuff has been a really cool surprise too, but People On Vacation is definitely the focus. The trajectory of that project is something that we never dreamed of, it was just something that we were going to do for fun. The way people have embraced it is amazing.

What are you working on at the moment?
People On Vacation are writing songs for a country album. It’s going to be cool. It’s going to be the same process but then we’ve hired a lot of country Nashville, Texas musicians. I also have solo songs that haven’t been recorded yet – it’s something I’m trying to grow gradually.

The house party tour was such a cool idea!
To my knowledge, no one has ever done it in the UK. I wanted to make sure that if I came to the UK on my own, or with Erik [Chandler] or whoever, that I played for people who wanted to be there. I didn’t want to go play in the corner of bar and have to fight for people’s attention and have nobody care or know who I was. I thought about it, and why not guarantee myself 20-50 people that love POV or Smile Smile? That’s where the idea came from. I just decided to go for it, and did, and it could not have been more unreal. It was so much fun and everybody was bonding and drinking together. You just can’t get that at a big concert.

How is this tour going?
It’s the sweetest deal ever on this tour!
Are you performing?
Jaret and I do one People On Vacation song a night and Bowling For Soup backs us up. So it’s Bowling For Soup playing a People On Vacation song and I come and play an extra guitar and sing. In the UK it’s funny to see the little pockets of people that get really excited when it happens, and then in between these pockets of people are people who get confused. So I do one song a night and I help with filming the DVD – really I just get to hang out with my best friends and watch them do their farewell tour.
Like a groupie?
[laughing] Yeah! I’m like a groupie! Actually I’m more like a whore because I’m getting paid.
Which some might say is better, because if you’re doing it anyway…
Exactly! If you’re going to do it anyway.

Have you learned any words while you’ve been here this time?
There’s what I call the classics: dogging and knob jockey.
Anyone backstage here that I mention dogging to is like “yeah, we’ve had this conversation with Ryan”…
[laughing] That’s probably me, having the same conversation over and over again because I’m fascinated. Here are some words that I’ve learned this time: Minging – I didn’t know what minging was, I was very confused. It means ugly, right?
It does.
I learned something else: stroppy knickers. In an American accent I know that sounds really inappropriate. I didn’t know what stroppy was. Stroppy and minging are my two words for this trip.
Well, I’ve got some new words to quiz you with.
Ok.
Do you know what a tosspot is?
A tosspot?! I don’t know but I love it already!
A tosspot is an idiot. What about arseholed?
Is that like bummed?
Drunk.
Oh.
Do you know what bonk means?
To fuck?
Yes!
I got one!
Do you know what doddle means?
No.
A doddle is something that is easy. Gagging?
Like gagging for it? Craving it?
Yes! No one ever gets that one!
That’s only from watching Oasis DVDs.
Do you know what having the hump with someone means?
Humping?
It means you’re mad at them.
Really?!
Gutted?
I learned that one my first trip. People were telling me they were gutted and I was like “are these people slicing themselves open?”
Do you know what jammy means?
I don’t know what that means.
Jammy means lucky. Yakking?
Puking?
Yakking is chatting. Knackered?
Tired.
Yes. And finally, cack-handed?
I don’t know that one.
It means clumsily.
Like backwards handed. Cack-handed, that’s incredible.