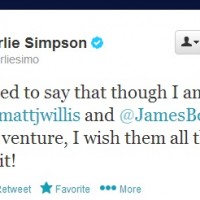 With the McBusted supergroup being confirmed, the only question still on people’s minds was: what does Charlie Simpson think about this?

For those of you who didn’t need counselling back in 2005, Busted called it a day when Charlie Simpson decided he wanted to leave the band, and Matt Willis and James Bourne didn’t want to go on without him.

Back in 2010 James told us that not only did Charlie not want to reunite with his bandmates, but that he didn’t want matt and James doing it without him either. The three of them are all on much better terms now, so Charlie must have given them the go-ahead… but how does he feel about it?

“Just wanted to say that though I am not joining @mattjwillis and @JamesBourne on their new venture, I wish them all the very best with it,” Charlie tweeted.

It’s a shame he isn’t involved, but it’s great that he’s ok with it happening.