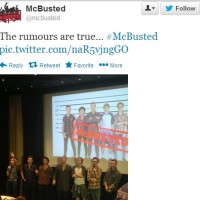 Today it has been announced that Busted and McFly will be forming a supergroup, and while they may be a Charlie Simpson short of a full-house, we couldn’t be more excited.

It all started when Matt Willis and James Bourne joined the McBoys on stage at their 10th anniversary shows at the Royal Albert Hall. This reignited something in fans, so we’re getting a full arena tour!

Matt and James will be joining Tom Fletcher, Danny Jones, Dougie Poynter and Harry Judd at the following dates:

The boys will also be performing during Children In Needs on BBC One on Friday night.