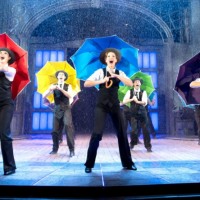 There are few touring shows that are as visually stunning as Jonathan Church’s Singin’ in the Rain. Based on the classic 1952 MGM film starring Gene Kelly, the fun show is set in 1920’s Hollywood and tells the story of the film industry’s difficult move away from the silent movie era towards talking motion pictures.

Starring James Leece as Don Lockwood and former Steps star Faye Tozer as Lina Lamont, the glamorous musical-comedy definitely has the feel-good factor and will leave you humming and whistling along for days on end. Leece is fantastic in the lead role, delivering an incredible solo performance at the end of the first act, whilst Tozer shines brightly in her comedy-centric role, delivering laugh after laugh with her distinctively awful voice.

Singin’ in the Rain is bursting with inventive choreography (by Andrew Wright) and the real stars of the show are, without a doubt, the ensemble cast who flawlessly tap-dance their way through countless elaborate routines. The Broadway Melody Ballet was a definite highlight whilst the energetic finale managed to make the entire audience fall back in love with good old fashioned entertainment.

Oh, and a final word of warning – each show uses an impressive 12,000 litres of water so if you’re sitting in the front few rows you might just find yourself literally spending the night singing in the rain!
Singing in the Rain runs at The Festival Theatre in Edinburgh until Saturday 15th March, 2014. For tickets (priced £17.50 – £46.50) and more information, visit www.edtheatres.com