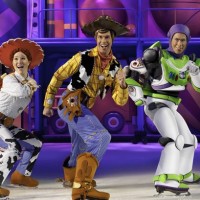 A brand new Disney on Ice show is currently touring the UK and the magical show is still set to make stops in Nottingham, Glasgow, Liverpool, Belfast, London and Cardiff!

Disney on Ice presents Worlds of Fantasy is hosted by Mickey and Minnie Mouse (naturally!) and features characters from some of Pixar and Disney’s most beloved classic and modern movies such as The Little Mermaid, Cars, Tinker Bell and Toy Story 3.
Children and adults alike will be amazed by how well the cast bring the stories to life through their flawless skating and the outstanding special effects that are used during the action-packed show.

“From the contemporary feel of Cars and Toy Story 3 to the timeless quality of The Little Mermaid and Tinker Bell, audiences will see four completely different Disney worlds brought to life,” explains producer Kenneth Feld. “All of this provides a value that is truly unparalleled in the world of live family entertainment. More than ever before, there’s something for everyone.”
Tickets for Disney on Ice presents Worlds of Fantasy are on sale now. For more information, click here.