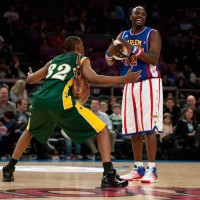 They’ve been successfully entertaining audiences for over 80 years, but The Harlem Globetrotters proved that they’re still at the top of their game when they dribbled out onto the court at The SSE Hydro in Glasgow last night.

For those not familiar with the ‘Globies’, they are an exhibition basketball team from America who fuse comedy, dance and sport into one chaotic, yet entertaining, show. If you go to see them expecting a genuinely competitive sports game then you will leave bitterly disappointed – this is theatrical sport, comparable to WWE in that the outcome is obviously predetermined and the players’ antics vigorously rehearsed.

Not that predictability is necessarily a bad thing. The silliness was as popular with the younger members of the audience as the endless slam-dunks and blind passes, with team mascot Big G’s solo dance number commanding one of the biggest cheers of the night. Crowd interaction made up a huge part of the evening, with one lucky youngster given countless chances to net a basket and a lifelong memory with the full support of the team and audience alike.

When they weren’t dancing to Gangnam Style or chasing each other around the arena with buckets of water, each of the players on the court proved they were more than capable basketball players.

Bounding from one end of the court to the other at lightning speed, they netted as many baskets as you’d expect to see at a Miami Heat vs San Antonio Spurs game.

For all the music, dance and theatre shows currently on the go, there really isn’t anything else quite like The Harlem Globetrotters. A fun two hours of family-friendly fun that everyone should go and see at least once.

For more information on The Harlem Globetrotters, click here.