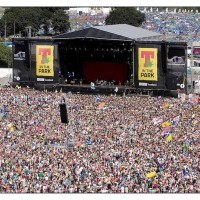 The organisers of T in the Park have confirmed that the popular music festival will be staged at Strathallan Castle in Perthshire from next year.

The announcement comes after months of speculation about the future of the festival at its current site after health and safety inspectors raised ‘substantial’ concerns about an oil pipeline that currently runs underneath the ground.

The event, which is sponsored by Tennents, was moved to Balado in Kinross from its original home at Strathclyde Country Park in 1997 and has been consistently staged there ever since. Over the past seventeen years, the festival has featured some of the biggest names in music including The Killers, Green Day, Foo Fighters, Katy Perry, Oasis, The Stone Roses and Rihanna. It attracts up to 85,000 people each day and is Scotland’s biggest music festival.