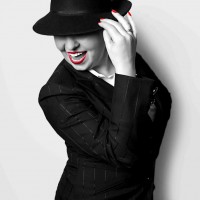 A former Musical Theatre student from Edinburgh is set to make her professional debut in Sweet Memories of Doris Day at The Shed in Glasgow this weekend.

Sarah Laing, who has just completed a BA honours degree at the university, will pay tribute to the career of legendary performer Doris Day during the hour long show, which takes place at the Langside Avenue venue. She says: “I am so excited to be performing my first professional one-woman show. I’ve been a fan of hers since I was eight years old and first viewed Calamity Jane. I love how she can be funny and quirky one minute then sad and serious the next!”

Sarah has wanted to pursue a career in musical theatre since she was a young child and spent her youth dreaming of performing onstage. She says: “To be performing my own show is a dream come true for me. I used to watch others performing onstage in awe and wish it was me up there – now I’m finally getting the chance to do just that!”

The show, which was produced in association with Tram Direct, will feature stories about Doris’ life and renditions of some of her most popular songs, including Que Sera Sera and Sentimental Journey.

Sarah explains: “As Doris recorded so many great songs, the hardest thing was choosing which ones to include in the show. In the end, I decided to include as many different ones as we could to ensure that there was something in there for everyone.”

Sweet Memories of Doris Day is on at The Shed on Langside Avenue on Saturday, June 17th and Sunday, June 18th at 1pm. Tickets cost £10 each and include a pie and a pint.