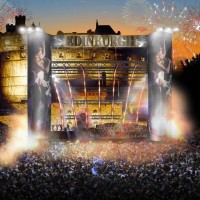 Jessie J is the latest star to be added to the BBC One concert at Edinburgh Castle later this month.

The Pricetag singer will join previously announced acts such as the Kaiser Chiefs, Culture Club (who will be performing live for the first time in 15 years!), Paloma Faith, One Republic and Katherine Jenkins at the event, which is being held to celebrate the opening of the 2014 Commonwealth Games in Glasgow.

The pop sensation said: “I always have so much fun in Scotland and the crowds are always so amazing so I can’t wait to be back again at such an iconic venue performing alongside such wonderful artists. It will definitely be one to remember – and I love a deep fried mars bar!”

BBC Executive Producer Guy Freeman says: “The line-up for Live at Edinburgh Castle just keeps getting better and the addition of Jessie J will add even more sparkle to the night. There is something for everyone at this concert and to see so many different musical performance at one event will make it really special and unique.”

Live at Edinburgh Castle takes place in Saturday 19th July and will be hosted by The One Show’s Alex Jones. For tickets and more information, visit www.bbc.co.uk/edinburghcastle.