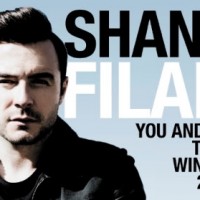 Shane Filan is hitting the road again as part of his ‘You and Me Tour’. Shane will be performing tracks from his current album as well as performing many of the old Westlife favourites to the delight of his fans, this is one special show and a must for any Westlife or Shane fan, tickets are on sale now and all the dates are below.

Shane was just a teenager when the mighty Westlife formed in 1998. In 2012 after 14 UK number one singles, 12 massive albums and numerous tours, the band decided to call it a day.

For Shane the future meant landing a deal with record giants Universal and beginning work on his first ever solo album, You and Me, which was recorded in both the UK and US. “It was strange not being with the band after so long but it was a new challenge for me working on something on my own. I ended up with over 40 songs because once I started I couldn’t stop. I didn’t want to rush anything so I took my time and made sure that everything was exactly as I wanted it to be. I’m very grateful to everyone for being so patient!”

Musically Shane decided to mix things up with some up-tempo and mid- tempo songs, all penned by the man himself. The result is an eclectic mix of pop, soul, country, folk and even a hint of traditional Irish music thrown in for good measure. “I love banjos and ukuleles. When you’re in a pub with a pint of Guinness, watching music that makes you stamp your feet, that’s what makes me happiest.”

The album was unleashed into the public in November 2013, and instantly became a massive hit with fans and critics alike. “It was a pretty nerve-wracking moment but I knew I’d put my heart and soul into the songs so all I could do was hope that people loved them as much as I did. The album is very personal to me as it’s very much about my wife Gillian who has been by my side throughout everything. I’m so overwhelmed with the reaction from people. It’s everything I was hoping for.”

As for the future? “I’m excited to see what it will bring. I would love to keep touring because I have such a passion for it. And of course I also want to keep on writing and recording music. It’s very different being out on my own
but I’m really enjoying it. As long as I get to carry on doing what I love I’ve got no complaints!”