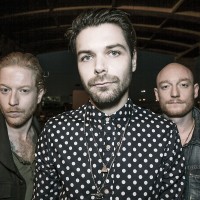 This weekend will mark the last time Balado Airfield in Kinross hosts T in the Park. We’ve scoured the impressive line-up to bring you our top 5 acts set to perform on each of the stages. First up, here’s our picks for the main stage…

Biffy Clyro
Biffy Clyro might be as regular a fixture on the annual T in the Park line-up as the Tennent’s logo but they’re asked to come back time and time again for one simple reason: T in the Park is their festival and the crowd absolutely love them.
2014 will mark the tenth time the Ayrshire rock band have played the festival (they made their TITP debut on the T Break stage back in 1999) but it is the first time they have headlined the main stage, making it sure to be a legendary performance.

Pharrell Williams
Love him or loathe him, there’s no denying Pharrell Williams has helped penned two of the catchiest tunes of the last decade (Happy and Blurred Lines). He plays the main stage on Saturday before DJ-extraordinaire Calvin Harris and we can’t wait to see what he does to entertain the audience!

Twin Atlantic
Twin Atlantic are an alternative rock band that have been making quiet waves in the music industry for several years. They have a fantastic reputation as live act and have previously supported many legendary rock bands such as Blink 182 and The Smashing Pumpkins. They’re also from Glasgow so are bound to bounce off the crowd and give an amazing performance as a result.

Paolo Nutini
After his second gig at The Hydro in Glasgow sold out in mere minutes earlier this week, leaving thousands of fans bitterly disappointed, we’re expecting a massive turn-out for Paolo Nutini. His third album, Caustic Love, proved to be a more mature offering than his previous efforts and we can’t wait to see the Paisley-born singer perform in front of his home crowd.

Paul Weller
Paul Weller, former frontman of The Jam, will bring some classic rock and roll to proceedings on Sunday evening. The Into Tomorrow singer-songwriter has performed at pretty much every festival and big music event over the last thirty years so is a reliable choice for anyone looking to see a polished rock performance.

For the full T in the Park 2014 lineup, visit www.tinthepark.com