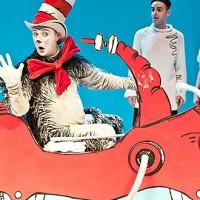 This production of The Cat in the Hat is as zany, unpredictable and vibrant as the iconic Dr Seuss book. The Cat in the Hat tells the story of two young children who are bored because the rain is forcing them to stay indoors and find something to do. Their boredom is short-lived as, upon hearing of their unhappiness, an eccentric talking cat comes to pay them a visit and, in turn, manages to wreak havoc in their home.

The simple set design, which is consistent with the book’s iconic blue, white and red colour scheme, acts as backdrop for a fun kids show that is anything but plain. The young cast of this production are all hugely talented – constantly expressing themselves through not only the script but also through their bodies and exaggerated facial expressions. A scene in which the cat balances everything from a fishbowl to a teapot on his head whilst trying to juggle is particularly impressive, provoking giggles galore from the younger members of the audience. The boisterous Thing 1 and Thing 2 are also fantastic – wreaking havoc not only on the stage but also in the aisles and, in doing so, ensuring the audience are constantly engaged with the story.

The Cat in the Hat is, without a doubt, one of the most exciting and interactive children’s shows on the 2014 Festival Fringe programme!

The Cat in the Hat runs at the Pleasance Courtyard in Edinburgh until Monday, 25 August. For tickets or more information, visit www.edfringe.com.