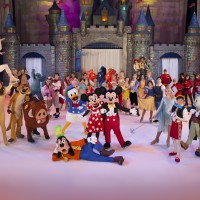 Here at Flecking Records, we absolutely love anything related to Walt Disney. Whether it’s acting like five-year-old kids in the Magic Kingdom or singing along to the High School Musical soundtrack at the top of our lungs, we can always rely on Disney to put us in a good mood.

We were delighted, then, when we heard that Feld Entertainment were set to bring their latest Disney on Ice production to the UK. As the titles suggests, 100 Years of Magic is an on-ice celebration of the Disney classics that have been entertaining Disney fans of all ages for the last century. The show, which features more than 60 different Disney characters from films including Aladdin, The Little Mermaid, Mulan, Finding Nemo, Toy Story, Beauty and the Beast and The Lion King, will skate across the UK before finishing up at London’s O2 Arena in January 2015.

The stunning skating sequences from the show were devised by the award-winning choreographer who created the skating segment for the Opening Ceremonies of the 2002 Winter Olympics.

Tickets for Disney on Ice celebrates 100 Years of Magic are onsale now. For tickets or more information, visit www.disneyonice.co.uk