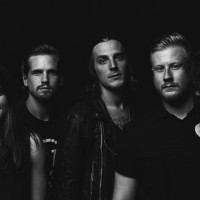 Earlier this year, Arizona’s The Maine took to the UK to support Deaf Havana on their headlining run. The Maine filled their off days with a couple of intimate headlining shows as well as festival appearances. Now, the band looks forward to their return on a full UK headline run; the first since the release of their 2013 full length album, Forever Halloween.

The tour will mark the fourth leg of the 8123 Tour which kicked off last summer in North America. Since then, The Maine has taken it to both the Philippines and most recently Brazil with their headlining set. This time around, they’ll be bringing out fellow American 8123 artists Lydia and Nick Santino. The tour promises career highlights for both support acts – it will be Lydia’s first time in the UK as a band and Nick Santino’s first in his solo career.

The Maine’s return to the UK follows their summer long stint on the Vans Warped Tour across North America. It also comes on the heels of their latest release – Forever Halloween Deluxe Edition, which dropped worldwide on June 17th (in the UK and Europe via Rude Records). The album includes five additional bonus tracks not seen on the original release.

Nick Santino spent his summer touring in support of his latest record – his first solo full length, Big Skies, produced by Pat Kirch of The Maine. The album came out back in May of this year to incredible fan support. Santino played the entirety of the Vans Warped Tour in the Acoustic Basement this year. Most recently, Santino has announced his fall headlining run across the US – starting after his return from the UK.

Since forming as a band over ten years ago, this tour will mark Lydia’s first time in the UK. Because of the extended wait, fans are highly anticipating catching their set for the first time. Lydia’s latest release was 2013’s Devil, though with a catalogue of four full lengths – the band’s set is sure to be varied with fan favourites.

Fans in the UK will see The Maine play a fresh set made up of songs from their previous releases in the usual high energy performance people have come to expect of the band. As their reputation precedes, The Maine plans to continue as a band accessible to their fans and will be hanging out at the venue each night to meet and greet. This fan engagement plays a large role in bringing the band back to the UK so frequently, and it’s not something they ever overlook. Currently signed with Rude Records in Europe and working independently at home in the US, The Maine are enjoying the freedom that comes without a major label contract; specifically the freedom to tour when they want and release music at their preferred pace.

What is going to be the last UK tour on their current album cycle, the 8123 Tour in the UK is one not to be missed by fans overseas.