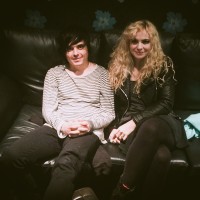 It’s been two years since we last saw The Dollyrots, when they hit the UK for a tour with punk-rocker Bowling For Soup.

Kelly Ogden and Luis Cabezas have been up to a lot since we saw them last. Along with their adorable little boy, River, they are hitting the road for a tour with the legendary Buzzcocks.

I saw down for a chinwag with them to find out what they’ve been up to, whether an album is harder to make than a baby and to quiz them on their UK slang.

How is the tour going so far?
Luis: It’s going good.
Kelly: It’s great. It’s a lot of fun.
Luis: Obviously it’s a little different for us now that we have River, so he’s our first priority instead of hanging out with our friends and partying all night. It’s been really cool though. We’re travelling with Mickey, who is on the drums, and Katie, Kelly’s sister. Our buddy Lee is helping out.
Kelly: Driving, doing merch – doing everything [laughs].
Luis: Yeah, so we’ve got our little crew. It’s really cool.

What’s it like touring with legends like the Buzzcocks?
Luis: It’s cool. We did a tour with them in 2010, they took us on their North American tour. So we already knew the guys and the way that they work. When they first picked us to go out with them it was like “Oh my God, this is a huge honour”.
Kelly: I think it was April Fools when our booking agent called and said “Hey, do you guys want to go out with the Buzzcocks to do a North American tour?”
Luis: “…five weeks in North America”.
Kelly: We were like “Shut up! Don’t be so mean!” but [booking agent] was like “No, seriously”.
Luis: They’re kind of the originators of pop-punk, so it meant a lot to be picked by them. This time around we knew we had to come back to the UK this year.
Kelly: We were hoping to come back over.
Luis: We couldn’t last year Kelly was eight months pregnant.
Kelly: I was super pregnant.
Luis: So Buzzcocks had dates booked and we recognised a lot of the venues from the Bowling For Soup tour, so we said that we’d like to play with them if we could. They said [puts on very English accent]: “Why not, if you show up, I guess you can play.”
[laughter]

It’s two years since we saw you last – what have you been up to?
Kelly: We made a baby and a record.
Which was harder?
Kelly: [laughing] The record.
Luis: Every record feels kind of like a baby. You spend about as much time making a record…
Kelly: Both were actually pretty enjoyable. We recorded this album over the course of months which was a little different. We did a pledge music campaign and we really enjoyed it because our fans could pre-order the record and have access to all of our updates as we were writing.
Luis: And as Kelly’s belly was growing…
Kelly: [laughing] Yeah, they got baby updates too.
Luis: We launched the pledge and spilled the beans on the pregnancy around the same time. So it was like “Ah, I’m pregnant, but I’m not showing yet” and by the time the record was done… The record got mastered when River was like three weeks old, so everything happened almost simultaneously.
Kelly: We recorded everything and Luis engineered it in out studio at home in Los Angeles, so it was really relaxed. If I needed to take breaks, if I was nauseous, I totally could.
Luis: We did everything as best we could and then took it to our producer who finished it off.
Kelly: Got some drums on it.
Luis: Stacy Jones drummed on it. We’re really proud of it.

What’s it like juggling the band stuff with being parents?
Kelly: It’s not as hard as I thought it would be.
Luis: It’s like anything else – if you don’t do it, you never know.
Kelly: I think the fear of doing it was far worse than actually going through with it.
Luis: I think, when something is hard to do, people exaggerate how bad it is. I’m not saying it’s not hard.
Kelly: I’m still breastfeeding so I’m still up all night.
Luis: I don’t know how she does it because he’s literally sucking the life out of her. You just kind of accommodate the situation you’re in.
Kelly: When you’re playing nice venues with good dressing rooms and you have a sister along to help…
Luis: Even if it’s a grungey show, that just means he’s not going to be there. We always find a way.
Kelly: It’s nice because we’ve been touring for ten years – more than ten years – and it’s not that it gets old, but it loses a bit of its magic. People always say “Now you have a child you’re going to see the world through their eyes and it changes everything” and it has changed this. I wake up and I want to show him places. It makes it a little more exciting again, which is cool.

Are you guys quite rock ‘n’ roll?
Kelly: Yes! We’re still pretty rock ‘n’ roll.
Luis: Yeah!
What’s you biggest rock ‘n’ roll moment, ever?
Luis: Of all time? Hmm…
[At this point in the interview, baby River starts being too adorable and steals the show.]
Does he like your music?
Luis: He falls asleep to it.
Kelly: I know when my big rock ‘n’ roll moment was. We had just signed to Blackheart Records and Joan Jett introduced us at our showcase like “Here are The Dollyrots” and then later that night we actually played as her backing band on stage. We actually played “I Love Rock N Roll” on stage with Joan Jett.
Luis: Yeah, like I got to play guitar and sing “I Love Rock N Roll” with Joan Jett!
Kelly: We’ve been so lucky. We’ve met so many of out idols and there’s been a lot of those moments.
Luis: We run into a lot of people that we grew up respecting, and a lot of them have taken us under their wing. We’re really fortunate.
Kelly: As good as you are, it’s still a crapshoot.
Luis: You just never know.

What’s next for you guys?
Luis: We’re working on a Christmas song – we try to do a Christmas song every year. Then we’re going to talk about what we’re going to do for the next album. We still have a couple of regions in the US that we need to tour. Once all that’s done we’ll work on the next record.
Kelly: We’re not sure what it’s going to be, if it will be a punk record or a little bit different. We’ll just keep making albums. We rely on our fans, whether it’s Pledge Music or Kickstarter.
Kelly: Maybe we’ll try Indiegogo next [laughs].
Luis: We’ll try it. Honestly, a lot of our time is spent fulfilling the commitments that go with the crowdsourcing stuff. You promise people a lot of stuff. Exclusive recordings and handwritten stuff, signed stuff. We spend a lot of time interacting with fans.

Have you discovered any new UK slang words while you’ve been here?
Luis: [Laughing] Bellend.
Kelly: U-bend, that’s my favourite. And I have a sentence.
Luis: You have a sentence?
Kelly: I do and in America it isn’t dirty in any way. “That spunky girl Molly with the fannypack, she was really bummed that you didn’t follow through the other day.”
[laughter]
Luis: There’s so many visuals.
Kelly: [Back home] that doesn’t mean what it means here.
I have some new words to quiz you with.
Kelly: When we did this last time, “the dog’s bollocks” was the big one.
Do you know what knackered means?
Kelly: Does that mean wasted?
It means tired. Bladdered?
Luis: Drunk?
Kelly: You have to pee real bad?
Drunk is correct. If something is a doddle…
Kelly: Is that like wasting time?
It means easy.
Kelly: [laughing] Oh man.
Do you know what banging is?
Luis: Doing it?
Yes.
Kelly: We sometimes say that too.
Luis: Like, “she banged that dude.’
Kelly: Because he didn’t follow through [laughs].
Chuffed.
Luis: Put off?
Kelly: Or when you throw up?
Luis: Like, disappointed?
Chuffed is when you’re happy.
[laughter]
Luis: Oh, it means the opposite.
Do you know what a tosser is?
Luis: A salad tosser?
Kelly: Is it a silly person? A clown?
A tosser is an idiot.
Mickey [their drummer]: [Laughing] I think you’re being very polite.
That is a nice way of putting it… Do you know what a chinwag is?
Kelly: A chinwag… no.
Luis: Is that a blowjob?
A chinwag is a conversation.
[Lots of laughter].
Mickey: I like that.
Luis: It could be a polite way of saying it.
Mickey: Works for me.
Do you know what a cock up is?
Kelly: [laughing] It sounds like an erection.
A cock up is a mistake.
[laughter]
Katie [Kelly’s sister]: I knew that one.
Kelly: Katie, are you kidding me? You know these?
Katie: Hugh Grant in his movies, he always says “Oh, I cocked up”
Luis: [The UK] sure like the word cock. I see it on road signs.
Last one. If you give someone a bell?
Kelly: A bell? Is that a penis?
[laughter]
Luis: Is it?
A bell is a phone call.
[laughter]
Luis: That doesn’t make any sense.
Kelly: I was thinking bellend. Bellend is my favourite thing.