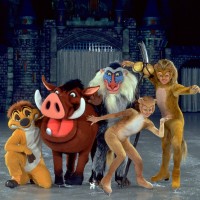 Of all the Disney on Ice shows that have toured the UK in recent years, 100 Years of Magic has to be the most spectacular. Featuring more than 60 different characters and stunning ice-skating routines choreographed to countless classic Disney songs, the show is an explosion of colourful cartoon magic from start to finish.

The show opened with the ‘Main Mouse’ and his loyal sidekicks providing hosting duties before a huge team of talented skaters burst into captivating on-ice enactments of some of Walt Disney’s most popular movies. From early classics like Pinocchio, Aladdin and Snow White right up Finding Nemo, The Incredibles and Brave, so many films were represented – ensuring that every single child in the audience was at least given a glimpse of their favourite characters.

The Genie from Aladdin proved to be an unexpected crowd favourite, stealing the show early-on with a fantastic routine set to Friend Like Me featuring energetic backflips, cartwheels and countless performers. The crowd interaction was wonderful throughout, with the skaters going out of their way to high-five children in the front few rows and wave to those higher up.

Whilst favourites like Buzz, Woody and the Princesses were all given their chance to shine, it was refreshing to see that the spotlight also fell on ‘rare’ Disney characters such as Jiminy Crickets and Sebastien from The Little Mermaid during 100 Years of Magic. A nod was even given to Walt Disney World with the inclusion of a dazzling It’s a Small World Sequence, complete with Mickey flying high above the stage in a hot air balloon!

Attending a Disney on Ice show is a fantastic way for anyone (regardless of their age!) to experience the legendary Disney magic without travelling to one of their magnificent theme parks. A wonderful way to spend an afternoon!

Tickets for Disney on Ice celebrates 100 Years of Magic are onsale now. For tickets or more information, visit www.disneyonice.co.uk