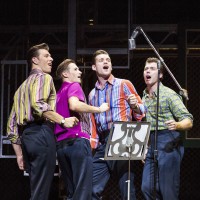 From their meteoric rise to superstardom from the wrong side of the tracks in New Jersey to their equally startling fall and subsequent redemption, Frankie Valli and the Four Seasons were never a typical boy band. It’s fitting, then, that the stage adaption of their fascinating story doesn’t fall into the trap of following the same cookie-cutter-like formula that most jukebox musicals do.

Jersey Boys is presented in a documentary-style format which allows for a more honest look at how life behind the scenes was with one of the world’s biggest bands. Yes, there’s perfectly quiffed hair, flashy sixties costumes and huge sing-along numbers (Walk Like a Man, Oh What a Night and Big Girls Don’t Cry, to name but a few!) to keep you entertained, but what makes Jersey Boys so unique is the way in which the narrative is told. Each of the four ‘boys’ are given the opportunity to play narrator for a quarter of the show and, in doing so, tell the story from their own perspective. This distinctive approach allows each band member the chance to shine and gives the audience the opportunity to really get to know not only Frankie Valli, but also Tony DeVito, Nick Massi and Bob Gaudio.

The writers and producers of Jersey Boys have done a fantastic job at condensing a 50 year-long story into a 2-and-a-half-hour long show. The story flows well, with the drama interspersed with enough upbeat music and humour to ensure it doesn’t ever take itself too seriously.

There is fantastic chemistry between actors, all of whom do a fantastic job of seamlessly moving through the decades to convincingly play their characters from when they were teenagers right up until The Four Seasons were inducted into the Rock and Roll Hall of Fame in 1990.

There are few musicals for which the anticipation of a UK tour has been as great as it was for Jersey Boys. Almost 20 million people have enjoyed the show since it debuted on Broadway in 2005 and, if tonight’s audience reaction was anything to go by, this is one show that shows no sign of slowing down anytime soon!