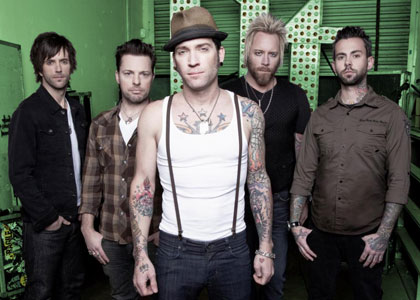 We were delighted when we learned that legendary rockers Lit were heading over to the UK for a tour next month (Nov).

We were even happier when we found out that Flecking favourites Army of Freshmen would be supporting them.

I had a chat with frontman Kevin Bates to the discuss the tour, the highlights of his career, his rock ‘n’ roll antics and to test him on his UK slang.

Hello Kevin, how are you?
I’m great. Excited to come back over to the UK.

We can’t wait for the tour! What can fans expect?
We’re very excited to head back over. The crowds and fans over there have always been a blast. You all are the best music fans in the world – no joke! What can fans expect? Well, we’re celebrating 15 years of our album, “A Place in the Sun” so we’ll be performing that from front to back. It’ll be a sweat-fest. This is our second time coming over this year. It was so badass the first time, we quickly booked another round.

What are you favourite and least favourite things about touring in the UK?
I hate that I don’t have my own car so I can get out and explore a bit more. I’m a photographer, so I like shooting cool things. Castles are neat. We don’t have that type of stuff here in the USA. Other than that, what’s not to like? Seems to be a great love for music in the UK. You have plenty of beer to choose from. Some great watering holes. Great attitude. We love it!!

You guys have been in the music business for a long time now. Which decade do you think boasts the best music?
The 70s, for sure. Early 80s as well. 1984 was an incredible year for metal. Metallica, Dio, Iron Maiden, Judas Priest, Van Halen, Twisted Sister all released insane, career changing albums this particular year. I point out metal because it truly is what brought the four original members of Lit together.

If you could go back and do it all again, would you do anything differently?
Something about the timing of the release and song choices on “Atomic”. Great album. Wish we performed more off it. Not sure if “Lipstick & Bruises” was the best choice as a first single. Love the song though. One of my faves. Whatever. It is what it is. No regrets. We’re still here and the true fans love that album… so…

What has been the highlight of your career so far?
Honestly, there have been many highlights. We’ve been truly blessed with all we’ve done and all we’ve met. The bottom line is we’re all fans of music so, when you get to meet, play with and actually jam with people you admire, it’s something special. Off the top of my head, going platinum in the U.S., opening for the original KISS, performing for our troops in some of the craziest locations, playing Download with Iron Maiden and meeting them backstage, doing a video with Pamela Anderson, opening for Judas Priest in our home town, having the number 1 song in 1999, playing Top of the Pops with RHCPs, NSYNC & Dixie Chicks was pretty different, playing bass for George Lynch, playing Texas Hold’em with Willie Nelson, playing the Playboy mansion with Hugh Hefner standing there watching and seeing the world the way we have has been the absolute best gift ever.

What’s the most rock ‘n’ roll thing you’ve ever done?
Winning $600 off of Willie Nelson in a game of Texas Hold’em in his saloon on his property in Texas. Just Willie and I going toe to toe was amazing. He’s a very sweet guy. Like hangin’ with your own grandpa.

What advice would you give to bands just starting out?
Don’t do it! [laughs] I’m kidding. Don’t get discouraged when you perform to three people, one night in some crappy bar. Every band has done it. If you really want it, don’t give up. Unless you are 400something and still playing to three people – chances are, it ain’t going to happen [laughs].

What is next for Lit?
Writing material for a new album. Taking our time, as we do. Not sure of any release timeline or anything like that. We’ll see. It’ll be a bit different, I can say that.

It’s a Flecking tradition that we quiz bands from over seas on their UK slang words. Do you know what the following mean…
Bird?
Middle finger?
A bird is a girl. Knackered?
Drunk?
It means tired. Do you know what a cock up is?
Being cock blocked by another dude?
A cock up is a mistake. Do you know what Jammy means?
Someone talking your ear off and keeping you from what you really want to do. I call it getting jammed up.
I like that! In the UK it means lucky. Gutted?
Puking?
If you’re gutted, you’re sad.