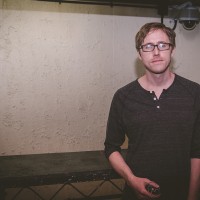 Lydia is an indie rock band from Gilbert, Arizona. Formed in 2003, front man Leighton Antelman along with a different array of band mates released three albums. The fact he always tours with different musicians is something Leighton thinks might be the reason Lydia have been around and doing so well for so long.

We sat down for a chat with Leighton, ahead of his set on the 8123 tour with Nick Santino and The Maine. This is Leighton’s first time in the UK, so we did the very English thing of chatting about the weather – about how cold and wet it is.

Apart from the weather, how are you finding your first UK tour?
I like it here. It’s really cool. You guys have much cooler buildings.

How’s the tour going so far?
It’s going good. This is the fourth show, so I guess we’re almost halfway through. It’s been awesome.

Are you quite big party animals on this tour?
You pick your nights. If there’s a day off the next day, everyone goes pretty hard. Not that crazy though.

Have you had any big, stand-out rock and roll moments during your career?
I don’t think I have – I need some [laughs].

You’ve been in the business for a long time now – what’s the secret to a long and happy band life?
That’s a good question. I think if there was a secret, so many bands would still be together. I’ve always just had a really cool bunch of dudes to play music with. I don’t tour with the same people every tour, I like playing with different friends. Maybe that has something to do with it.

What are you working on next?
We are writing and recording a new record after this tour. It will be out sometime next spring.

While you’ve been here, has there been any words or phrases you’ve heard and not understood?
Some girl called a fish and chips place a chippy.
We’ve got a few UK slang words to quiz you with. Do you know what a bird is?
A girl.
Yes. Do you know what knackered means?
No, what’s that?
It means tired. Bladdered?
You have to pee?
It means you’re drunk.
[laughs]
Do you know what a cock up is?
A cock up? Like a fight?
A cock up is a mistake.
[laughs] I think I got one of those.