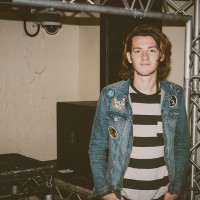 Back in May of 2013, pop-rock four piece A Rocket To The Moon announced the end of the band. Fast forward just over a year later to today, and former frontman Nick Santino is celebrating the release of his debut full length as a solo artist. Santino worked with close friends and fellow musicians to create the album, Big Skies which was produced by Pat Kirch of The Maine at the 8123 Studios in Arizona.

Within this past year, Santino has performed extensively through A Rocket To The Moon’s farewell tours, self-released two brand new solo EPs, completed his first US tours under his own name and even played shows in a few countries internationally! Somewhere in the mix, he found time to write and record his brand new full length album, Big Skies.

Nick, who describes his folk-rock music as a modern take on something classic, is currently touring with the 8123 Tour, alongside The Maine and Lydia. Ahead of his set, we sat down to chat about what he’s working on, his rock ‘n’ roll lifestyle and to quiz him on his UK slang.

How’s the tour going so far?
It’s a lot of fun. We’re only a couple of days in, but it’s a blast.

Are you much of a party animal?
I’m not a party animal. Everyone kind of does their thing – I like to go to bed or watch a movie [laughs]. It depends on the day – if there’s a club night after the show – but we stay pretty tame.

Have you had any big rock ‘n’ roll moments during your career?
Oh man, nothing too crazy. I go to sleep before nine [laughs]. It sounds cheesy, but playing all over the world – that right there is a really cool thing that not a lot of people get to do.

What’s it like going from being in a band to touring as a solo artist?
It’s different. It’s a lot less stressful, I think. You don’t have to deal with other egos or try to figure stuff out when you disagree on things so it’s better that way. The pressure is on a little more because it’s just me standing on stage. I think I honestly like it better.

Is there anything you miss about having band mates?
I miss playing with the band – playing full band music.

What can we expect from your set tonight?
I’m playing 25 minutes, so nothing too crazy, and it’s just me on stage. I try to make it something cool.

What’s next for you?
I go back home and then I do a couple of weeks headlining a tour in the States with some friends. I’m keeping busy doing the touring thing.

It’s a tradition of ours to quiz bands from over seas on their UK slang. Do you know what the following words mean… Bladdered?
I’ve heard that one, I think…
It means drunk. Banging?
Nope.
Sex.
[laughs] That’s what I figured but I didn’t want to say it.
Don’t worry, the tone is lowered. Do you know what a tosser is?
A tosser? It sounds bad…
A tosser is an idiot.
[laughs] OK, I was going even further down the raunchy road.
Do you know what a bird is?
A girl.
Yes. Do you know what a chinwag is?
Nope.
A conversation. What about a cock up?
[laughs] No!
A cock up is a mistake.