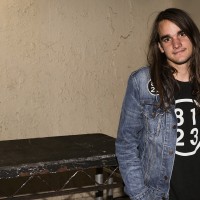 The last time we saw The Maine here in the UK they were supporting Deaf Havana, so we were delighted to learn they were coming back this month to headline the 8123 tour, supported by Lydia and Nick Santino.

Since the release of their latest full length, the band has self-recorded and released an all acoustic EP and continues their intensive touring schedule worldwide. Ahead of his high-energy headlining set with band mates John O’Callaghan, Kennedy Brock, Garrett Nickelsen, and Jared Monaco, we hung out with drummer Pat Kirch, to talk touring, the secret to a long and happy band life and to – of course – test him on his UK slang.

The Maine were supposed to be playing at The Cockpit in Leeds, but when it closed down last months all gigs were moved to other venues around the city.

How are you doing?
Doing well. Just enjoying being in Leeds, but it’s weird not being at The Cockpit.
We were really sad to see it close down.
Yeah, I don’t know what happened.

How’s the tour going so far?
It’s awesome. I think this is the fifth show and it’s all been great. It’s cool to be here with our best friends. The 8123 tour is something that we’ve done in a few other places.

What have you been up to since we saw you last in April?
We did the Warped Tour – that was big. We’ve been on the road a lot. We started working on the next record over the past month or so. We also put our a delux edition of Forever Halloween – so that’s out now.

Do you have big, rock and roll moments?
In the moment, I don’t think you realise you’re having rock and roll moments. I think over in Brazil it feels rock and roll, just because we have to have security guards and you’re rushing from the venue to a van to the hotel. Hanging out and drinking up on the roof of the hotel – it’s things like that really.

What do you miss the most when you’re on the road?
I think just being in one spot for longer than a day – you realise how awesome it is to have a place to call home and go back to, and sleep in the same bed every night. When you’ve been on the road so long you get used to it. Being on the road becomes the new normal to you.

You guys have been together over seven years – what’s your secret?
I think doing something that you believe in and the fact that we make music that we love, and records that we think people are enjoying. For us, just doing what we enjoy is what keeps us happy. I see other bands that are trying to do something or be something, and I think there’s an unhappiness that can come with that. You’re forcing yourself to be [something you’re not] and if it doesn’t work out you’re left without the success and without the happiness.


What can we expect from the set tonight?
A lot of songs. We haven’t headlined here in a while so we’re going to play twenty songs. It’s a good mixture of all the records and we’re playing a song that’s unreleased – I think it will be a good mixture, really loud and high-energy. And we bring out all the other guys on the tour, to make it a party.