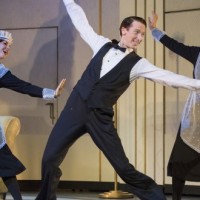 From the magnificent art-deco sets to the stunning costumes and iconic songs, everything about Top Hat comes doused in 1930s glamour.

The stage revival, which is based on Irving Berlin’s hit 1935 film of the same name, won three Olivier awards during its stint in London’s West End before the cast toe-tapped their way to Edinburgh’s Festival Theatre as part of their latest UK tour earlier this week.

Set during the golden age of the 1930s, Top Hat tells the story of Broadway star Jerry Travers (Alan Burkitt) as he falls hopelessly in love with society dame Dale Tremont (Charlotte Gooch) whilst performing in London. When a case of mistaken identity threatens to derail their budding romance, Jerry must prove to Dale that he is the man for her.

Top Hat features countless stunning dance routines, choreographed to iconic songs such as Cheek to Cheek, Puttin’ on the Ritz and Let’s Face the Music and Dance. The cast were continually in sync with each other, performing every shuffle, heel tap and stomp with as much precision and class as Ginger Rogers and Fred Astaire did in the original silver screen version. The magnificent live orchestra played an integral part in the show, adding authenticity and glamour to proceedings. Unsurprisingly, West End stars Charlotte Gooch and Alan Burkitt are both sensational in the lead roles and the chemistry between them managed to make the loose plot believable. John Conroy was equally fantastic and managed to inject some welcome silliness into the show as eccentric butler, Bates.

All in all, Top Hat is one of the few musicals that is truly befitting of its reputation as a classic.

Top Hat runs at The Festival Theatre in Edinburgh until Saturday, 18th October. For tickets or more information, visit http://www.edtheatres.com/tophat