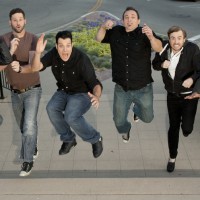 In a decade of touring the United Kingdom, as frontman for an American band that has played in front of thousands at festivals to 5 people in a pub, I’ve learned a few lessons about subjects an American shouldn’t bring up in your fine country. Here’s a brief guide about what to avoid, so perhaps future generations of Americans can be spared the the pain and shame I’ve experienced. As I am drug off to the Tower of London to pay for my sins, know one thing, I regret nothing!

Although you may find it absolutely fascinating that the case has never been solved that does not mean every single person residing in the country that his crimes took place in over 100 years has the same passion for the case as you do. The Pakistani gentlemen at the kebab shop in Sheffield at 2 in the morning certainly does not. Trust me. I’ve asked him.

Don’t even try. Much like the Borg in Star Trek Next Generation… resistance is futile. No argument you have, be it about low scores or ties or the Super Bowl or physical contact or cheerleaders will convince anyone in the UK, that our football is superior. I once watched our UK born and bred booking agent weep openly when England lost in the world cup. As I consoled him with my thick redneck accent, a massive cheeseburger with a side of Freedom Fries, and visit to a shooting range in my mud covered truck (yes, we know what you think of us and it hurts), I did have to admit, that type of passion for their football does kind of make it superior to ours… kind of.

They’ve been hearing the jokes long enough. “Yeah, but we kicked your butts in the Revolutionary War” … I’m sure that was a painful game changing insult to someone’s great, great, great, great, great, great, great grandfather but these days, you just sound like a moron. The British need to forgive us on that, we don’t have a lot of history to study since our country is so young so we were force fed Rev War facts out of the womb.

You can’t out drink a UKer. You can try, you can put up a hell of a fight, you can go down clinging and swinging, but you’re going down. Trust me, you’re waking up in a porta-pottie in a field breathing in your opponent’s day old urine while they are enjoying an afternoon cocktail. Not that I know this first hand but let’s keep Download on the down low, know what I’m saying?

While this a solid debate because we’ve both produced the best bands in the world and no other countries have even come close, they have the atom bomb of this conversation, The Beatles. They’ve sent a lot of shit our way sonically, Coldplay, Spice Girls, just for starters, but they have the freaking Beatles. For that, just say thanks, buy um a drink, root for their football team, tell them their red coats looked bad ass in the Rev War and let them know who Jack The Ripper really was… not an American!

Army of Freshmen return to the United Kingdom this month with Lit. Tickets on sale here. Check them out on Facebook, Twitter, check out their weekly podcast, Fresh Talk on iTunes, see their latest video, and check out their upcoming comedy film, Betting on Baker.

Words by Chris Jay of Army of Freshmen. Image by Matthew Hill.