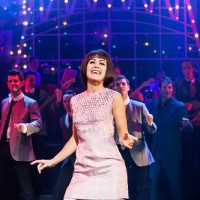 Dreamboats and Miniskirts, the sequel to Dreamboats and Petticoats, follows protagonists Bobby (Alex Beaumont) and Laura (Elizabeth Carter) as they come to realise that staying in the charts is even harder than scoring that elusive first big hit.
Written by Laurence Marks and Maurice Gran, the cheery yet simplistic jukebox musical relies heavily on the endless stream of bouncy 60’s classics that are churned out throughout. Both the leads are fantastic vocalists – with Carter turning in several particularly stunning performances. Whilst hits such as Twist and Shout, Pretty Woman and Be My Baby had the audience feeling uplifted, the plot itself left much to be desired. Unlike Dreamboats and Petticoats, Miniskirts ultimately lacks the heart of its hugely popular predecessor. With so many undeveloped relationships and characters, identifying with the show is somewhat difficult and I was left feeling indifferent about whether or not the characters had happy endings to their stories.
However, the simple plot means that you don’t necessarily have had to have seen Petticoats to follow the show and Miniskirts features more than 40 songs, making it a great choice for anyone that wants to go along to enjoy the music and relive the Swinging Sixties.
Dreamboats and Miniskirts runs at The King’s Theatre in Edinburgh until Saturday, 8th November. For more information or to book tickets, please visit http://www.edtheatres.com/dreamboats